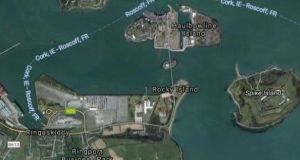 The planning board was due to give a decision on Wednesday on the plan for the 240,000 tonnes municipal and hazardous waste incinerator at Ringaskiddy. Image: Google Maps

An Bord Pleanála has deferred a decision on a controversial €160 million incinerator for Cork for a seventh time.

This is to allow board members assess additional information it had sought from developer Indaver and the response from local campaigners opposed to the proposal.

The planning board was due to give a decision on Wednesday on the plan for the 240,000 tonnes municipal and hazardous waste incinerator at Ringaskiddy but the decision has been deferred with a new decision date now fixed for December 5th.

The latest deferral comes 18 months after an oral hearing into a third planning application by Indaver to develop an incinerator at the site and almost 16 years after Indaver first applied for planning permission for a waste management facility at the site.

The most recent chapter in the long-running saga began on January 13th, 2016, when Indaver lodged an application for the incinerator at Ringaskiddy under the Strategic Infrastructure Act. An Bord Pleanála subsequently held an oral hearing to hear submissions on the proposal.

The oral hearing lasted almost a month in April and May 2016 under inspector Derek Daly who was initially due to give a decision on July 12th, 2016, but that was deferred and a new date of October 26th was set but that was later deferred until January 24th, 2017.

Since then there have been a total of four further deferrals much to the frustration of local campaign group, Cork Harbour Alliance for a Safe Environment (CHASE) who expressed frustration on Wednesday at the decision by An Bord Pleanála to further defer a decision.

According to Linda Fitzpatrick of CHASE, the series of deferrals by An Bord Pleanála have made it even more imperative that the board refuse planning permission for the project given a number of developments in the 18 months since the oral hearing.

Ms Fitzpatrick pointed out that since the oral hearing, Cork County Council have rezoned the area in the Local Area Plan in July 2017 while nearby Spike Island has been Europe’s leading tourism attraction making the decision to locate an incinerator nearby even more untenable.

She also pointed to recent extreme weather events such as Storm Ophelia which she said is causing visible and ongoing erosion of the site which CHASE highlighted at the oral hearing at the Carrigaline Park Hotel in 2016.

However, Indaver Ireland managing director, John Ahern expressed confidence the proposed waste to energy facility was fully in line with national, regional and EU waste policy, requiring waste to be managed in an economic, sustainable and environmentally appropriate manner.

“As I have said from the outset, we are confident that our proposal is fully in line with regional, national and EU waste policy. From a local point of view, most of Cork’s residual waste is sent to waste management facilities elsewhere in the country or is exported abroad.

“Therefore it’s clear that there’s a need for a suitable, sustainable waste solution for Cork and the wider southern region,” said Mr Ahern adding that the facility will generate about 18.5MW of electricity for export to the national grid.