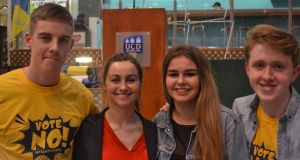 University College Dublin Students’ Union president Katie Ascough said the referendum to impeach her is a “freedom of thought” issue on campus.

The move to impeach Ms Ascough began following her decision to remove a page in the UCDSU freshers’ Winging It magazine that contained information on abortion services abroad, and reprint the magazine at a cost of up to €8,000.

The impeachment referendum, which will be voted on today and tomorrow, was triggered by a petition signed by more than 1,200 students.

Speaking publicly for the first time since the start of the impeachment campaign at a referendum hustings, Ms Ascough said: “I know I’m not the typical SU president, I’m not pro-choice – I made that very clear during my campaign.

“But I think we have space for more than just one opinion in our union.”

The hustings was attended by several hundred students, and representatives of both campaigns fielded questions.

Amy Crean, head of the Vote Yes to Impeach campaign, said Ms Ascough’s personal views on abortion had affected her professional duties as head of the pro-choice student union.

They are part of the five-person sabbatical student union team, which includes Ms Ascough. They are taking annual leave from their positions to campaign.