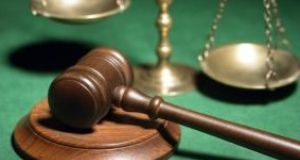 The 48-year-old Belfast man was extradited from the Republic of Ireland last December to face charges.

A German court has sentenced Belfast man James Corry to four years in prison for attempted murder for involvement in a Provisional IRA (PIRA) mortar attack on a British army base in the western city of Osnabrück in 1996.

Corry, a long-time resident of Killorglin, Co Kerry, admitted he was in Osnabrück, Lower Saxony, ahead of the attack on June 28th, 1996 and was responsible for mounting a pre-assembled mortar firing device on the back of a rented Ford Transit pick-up truck.

He drove the truck to a side entrance of the Quebec base at 6.15pm and triggered a timer, which detonated at 6.50pm. Two mortars failed to ignite, a third detonated on the other side of the fence near a base petrol station. No one was injured in the attack, although 150 people were in the base at the time of the attack.

Through his attorney Corry told the court the attack was aimed to “make clear to the British military that there was no secure place . . . on the continent”.

Corry confirmed he once belonged to a PIRA active service unit (ASU) but declined to name any other members of the unit.

He agreed it was possible the attack would have killed members of the British armed forces in Germany, but said a higher death toll would have been likely had the attack been launched at noon at not at 6.15pm.

German prosecutors said the 70kg ammonia mortar device caused almost €100,000 in damage it was “only by luck” that people were not injured or killed.

Corry told the court he had been involved in “absolutely no activities” for the IRA since the 1996 attack and supported the peace process “with complete conviction”.

He was arrested near his home in Killorglin in October 2015 on foot of a European arrest warrant issued by Germany. Last November, the High Court in Dublin ruled Corry should be extradited to Germany.

He presented himself at Dublin Airport in December 2016 and on arrival in Frankfurt - his first time leaving Ireland since 1996 - was formally charged with attempted murder. The statute of limitations has expired on a second explosives charge.

In its ruling the court reduced the sentence by a year for time served after the defence pointed to German procedural delays in acting on information about Corry’s whereabouts supplied by the Irish authorities in 2005.

In addition, his defence attorney said Corry would be a free man had he been convicted of a similar offence in Northern Ireland under the terms of the 1998 Belfast Agreement.

The Belfast man was the second conviction related to the 1996 attack. In 2003, former British soldier Michael Dixon was sentenced to six years and six months for his role in the attack. German prosecutors believe five people in total were involved.