More than 60% of adults in North obese or overweight 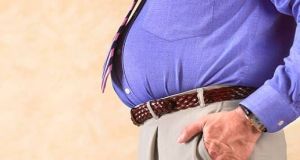 Obesity levels in the North have shown an upward trend over the last decade from the 24% recorded in 2005/06. Photograph: Getty Images

General health appears to be improving in Northern Ireland and fewer people are smoking, but adults are getting fatter, according to a new survey by Stormont’s Department of Health.

Some 73 per cent of participants in the survey described their health as being good or very good, an increase from the 70 per cent reported the previous year. Yet one of the key findings is that more than six out of 10 adults in the North (63 per cent) are obese or overweight.

The survey found 27 per cent of adults were classed as obese, with a further 36 per cent regarded as overweight. Obesity levels have shown an upward trend over the last decade from the 24 per cent recorded in 2005/06.

The Department of Health survey of 3,888 people aged 16 and over found that one in five still smoked, which is down by 2 per cent from the previous year. In the 1980s a third of respondents smoked.

Smoking was found to be more prevalent in the most deprived areas (32 per cent) compared to the least deprived areas, where just over one in 10 people smoke. Just 6 per cent of respondents said they used electronic cigarettes.

The survey suggested that 17 per cent of those surveyed may have a possible mental health problem .

Of respondents who had been in contact with the health and social care system in the last year, nearly half had given a compliment to staff or the organisation. Just 3 per cent reported making a complaint about their care or treatment.