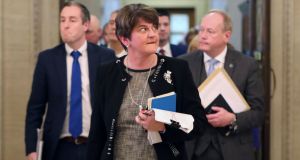 Arlene Foster said the DUP would ‘take every possible legal option open to us’ to prevent the legalisation of abortion in the North. Photograph: Niall Carson/PA Wire

An attempt to thwart the liberalisation of abortion law in Northern Ireland fell at the first hurdle on Monday when the Northern Assembly, sitting for the first time in more than a thousand days, was unable to complete the first item of business – the election of a speaker.

The appointment of a new speaker required a cross-community vote but as Sinn Féin and the SDLP boycotted the vote this parliamentary obligation could not be met.

The DUP had supported the attempt to have a motion passed that would mean that any changes to abortion legislation or same sex marriage must be determined by the Northern Assembly.

However, as the motion could not be debated or voted upon it meant that directly after midnight on Monday abortion will be decriminalised in Northern Ireland and same-sex marriage will be legalised.

Outgoing speaker Robin Newton said at the outset of proceedings – which lasted less than an hour – it was clear under the provisions of the Northern Ireland Act that the Assembly must elect a speaker and deputy speaker with cross-community support as the first order of business.

This was challenged by DUP MLA Paul Givan who said advice from Attorney General John Larkin QC indicated standing orders could be suspended to allow the motion be considered.

“These are abnormal days and we are in a very abnormal situation,” she said. Mr Newton stood by the broad legal advice he had received, but said it was privileged and confidential.

SDLP members left the chamber, led by party leader Colum Eastwood, who said the government could have been restored at any point over the previous 1,000 days but that it was “absolutely clear” to them that this could not take place today “unless the DUP and Sinn Féin get their act together and get an Assembly formed”.

The SDLP, he added, would not be party to a “stunt” that was “using and abusing people’s emotions and sensitivities over a very difficult issue”.

The DUP also left the chamber, with Ms Foster saying the party would “take every possible legal option open to us”, up to and including repeal, to prevent legalisation of abortion in Northern Ireland.

UUP leader Robin Swann said the day’s proceedings were a “pantomime” and a “fiasco”. Mr Swann said that while he would call on Secretary of State for Northern Ireland Julian Smith to reinstate talks to restore the Assembly, it was now time to give serious thought to considering whether it was worth restoring.

The speaker then asked for nominations for the position of speaker. No nominations were forthcoming, with only the 10 UUP MLAs and the independent Unionist Claire Sugden remaining in the chamber. Proceedings were adjourned almost immediately afterwards when the UUP also left the chamber “out of courtesy to you [the speaker] and courtesy for this process”, said Mr Swann.

Earlier this year, the House of Commons in the absence of a devolved administration in the North, voted in favour of an amended version of the Northern Ireland (Executive Formation) Bill to decriminalise abortion, liberalise the law and introduce same-sex civil marriage to the North.

There will be a five-month consultation period to determine how the new abortion system will operate in Northern Ireland. Anti-abortion campaigners who gathered at Stormont on Monday argued it could mean abortion up to 28 weeks.

At present, abortion is permitted only in Northern Ireland if a woman’s life is at risk or there is risk to her mental or physical health that is long term or permanent.

The law allowing same-sex marriage will come into effect in January. In 2015 the Assembly voted by a narrow majority in favour of same-sex marriage. The DUP, however, used a blocking mechanism to ensure the legislation would not be changed.

Sinn Féin deputy leader Michelle O’Neill congratulated all the activists who had worked to deliver same-sex marriage and to bring about the “decriminalisation of women” and the end of an “archaic law”.

“I wish that the DUP and others put as much creativity into actually trying to make powersharing work as they have done today in an attempt to deny people their rights,” she said.

Alliance deputy leader Stephen Farry said what unfolded at Stormont was a “farce”.

“Our view is that we have to have talks reconvened as quickly as possible, so that we can do this properly and get this Assembly restored,” he said.

Traditional Unionist Voice party leader Jim Allister said it was an “exceptionally dark day . . . for the community of the unborn”. He said the “unregulated floodgates had been opened to abortion effectively on demand”.

Claire Bailey of the Green Party described the meeting of the Assembly as a “sham pantomime”. On abortion she said women would “now have equality across these islands” as would the “LGBT community”.