Nearly 60% of DPP legal staff are suffering from trauma 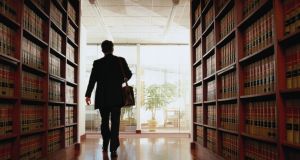 Nearly 60% of legal staff surveyed in the office of the DPP are suffering from medium to high levels of trauma. File photograph: Getty Images

Nearly 60 per cent of legal staff surveyed in the office of the Director of Public Prosecutions (DPP) are suffering from medium to high levels of trauma as a result of the distressing nature of their work.

According to an internal report, nearly a fifth of the office’s staff “frequently or very often” use medicines or non-prescription medicines to cope with the stress of their job, while a similar proportion rely on alcohol, the research states. *

Others have trouble sleeping or are over-vigilant with their own children as a result of dealing with child sex abuse cases.

The vicarious trauma study was commissioned by the DPP in light of concerns about the effects certain cases were having on the emotional wellbeing of staff. It was presented to senior DPP officials last May.

Less than 5 per cent of the 106 respondents to the study sought professional assistance, while only 3.9 per cent sought support from management in dealing with trauma or stress. About 200 staff work for the DPP.

There are currently no psychological supports for DPP staff aside from those offered to civil servants in general, the report notes. Nor is any specialist training offered to deal with trauma.

Staff reported that working on certain cases such as child abuse and fatal road traffic cases was particularly distressing, as were cases involving graphic photographic or video evidence “with flashbacks or intrusive thoughts arising out of this material regularly referenced”.

Those working in the DPP’s victims ’ unit were among the most at risk of suffering secondary trauma, the report states. The victims’ unit is responsible for dealing directly with victims of crime, including informing them when the DPP has decided not to prosecute their cases.

Cases involving vulnerable victims where the DPP opted not to prosecute were cited by staff as more difficult “to move on from”.

By one metric employed by the report’s author, barrister and trauma expert Jennifer Bulbulia, 18 per cent of staff reported moderate secondary trauma, with another 18 per cent reporting it as severe.

Using another scale, she found 54.4 per cent of DPP legal staff suffered moderate trauma, with 1.5 per cent reporting severe effects. This was much higher than the rate reported by the office’s admin staff (13.2 per cent moderate and zero per cent severe).

It said the trauma caused by cases could be exacerbated by events in staff members’ personal lives.

“Cases involving sexual abuse of children were described as having a higher impact when one becomes a parent.”

Parents reported incidents of “hyper-vigilance” with their child as a result of dealing with child sex abuse cases, “with concerns around sleepovers being particularly prevalent”.

Among the most common consequences of secondary trauma were trouble sleeping (37 per cent), feeling emotionally numb (31 per cent) and a desire to avoid certain kinds of cases (22 per cent).

In contrast, the report also noted high levels of job satisfaction and low levels of “burnout”, with staff describing “a positive, collegiate and cohesive working environment”.

The report made a series of recommendations including the provision of psychological supports and placing warning labels on the front of case files containing distressing material.

The DPP did not comment this week on whether these recommendations have been implemented.

Fianna Fáil’ spokesman on justice Jim O’Callaghan called on the Government to provide support for staff involved in prosecuting distressing cases, “not just for staff welfare but also for staff efficiency.”

* 21/10/2019: This article was edited to replace the word 'drugs' with the word 'medicines' which was the word used in the internal report.