Three hospitalised in Dublin after cleaning fluid spills in plane 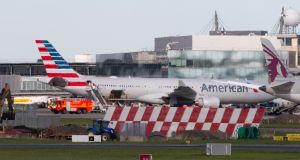 American Airlines Flight AA729 Heathrow to Philadelphia is seen at Dublin Airport on Monday where it made an unscheduled landing after cleaning fluid spilled. Photograph: Tom Honan/The Irish Times

An American Airlines flight was forced to make an emergency landing in Dublin due to an “odour caused by a spilled cleaning solution,” the airline has said.

In a statement an American Airlines spokesman said the flight had to land “due to an odour caused by a spilled cleaning solution in the galley.”

Two crew members and one passenger have been taken to hospital following the spill for an evaluation, the airline said.

The flight departed from London Heathrow to Philadelphia on Monday afternoon but was forced to make an emergency landing in Dublin Airport at 1:15pm.

The spokesman said “medical personnel have met the aircraft to evaluate any crew members or passengers who may need additional assistance.”

The plane, American Airlines flight 729, had been scheduled to travel to Philadelphia.

The DAA, formerly the Dublin Airport Authority, confirmed the flight had to land in Dublin due to a “medical emergency.”

“As per the airport’s standard operating procedures there was a full turn out of Dublin Airport’s emergency fire services,” a DAA spokesman said.