First cases of riding e-scooters without insurance brought to court 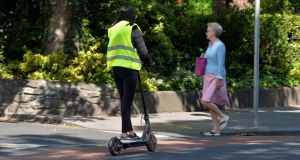 The two cases against e-scooters are understood to be among of the first such cases to come before the court. Photograph: Alan Betson

Two cases of driving without insurance by users of an electric unicycle and an electric scooter came before the District Court on Monday in what are understood to among the first before the courts .

Sergei Maslov (45), of Glashaus apartments, Tallaght, Dublin 24, was charged with riding a “black electric unicycle” on March 27th of this year on Templeogue Road, Templeogue, Dublin 6W, without insurance, contrary to the Road Traffic Act 1961.

Gheorghe Bidiac (36) was charged with the same offence in relation to a black electric scooter, again on Templeogue Road and on the same date. Both charges were brought by the same garda from the Dublin traffic department.

Mr Maslov was not in court when his case was called before Judge Gerard Jones in Blanchardstown District Court. The case was put back until December 9th.

When Mr Bidiac’s case was called, his barrister, Alan Delany, asked for it to be put back so that he could conduct inquiries because, he told the judge, certain types of electric vehicle require insurance and others do not.

“It won’t take long,” he said. The judge put the case back to December 9th, for hearing.

The two cases are understood to be among of the first such cases to come before the court involving allegations arising from the legal requirements for people using popular forms of electric transport.

A report commissioned by the Government on how electric scooters could be regulated and safely used on Irish roads has pointed to widespread lack of regulations and enforcement.

The report, commissioned by the Road Safety Authority, recommended “powered transporters” such as e-scooters and Segways should be permitted under certain regulations.

Following this report Minister for Transport Shane Ross started a two-month consultation period, which ends at the start of November, after which he will consider if the laws around e-scooter use need to be changed.

Fianna Fáil is seeking to introduce a law that would mean some electric scooters and other such vehicles would not require a licence or insurance, but that helmets would be compulsory, that there would be a speed limit of 25km/h and that it would be an offence to interfere with speed-limiting software on the vehicles.

Earlier this month the Dáil voted to delay by three months the introduction of the legislation so that consultation could be completed.