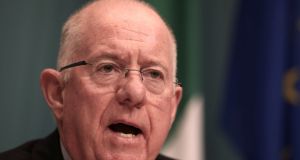 Minister for Justice Charlie Flanagan has written to the Ceann Comhairle over what he has described as the “illegal act” of a Fianna Fáil frontbencher voting for a colleague absent from the Dáil.

His letter came after revelations that Fianna Fáil TD Niall Collins voted six times for party colleague Timmy Dooley while he was absent from the chamber during the weekly bloc voting session on Thursday.

The two senior TDs stood down from the party’s frontbench at the request of Fianna Fáil leader Micheál Martin, pending the outcome of an investigation into alleged voting irregularities by Ceann Comhairle Sean O Fearghaíl.

The controversy over the absent votes means any law passed on the basis of a “fraudulent vote” will now be subject to challenge, the Minister of Justice said.

Mr Flanagan described what had happened as a really, really serious misdemeanour in our parliamentary system where it is alleged that somebody arranged a vote inside in the chamber and had absented themselves from the chamber when the doors are firmly locked,” he said.

“That to me is prima facie very suspect behaviour and totally unacceptable.”

Mr Flanagan said he wrote to the Ceann Comhairle Seán Ó Fearghaíl about the issue over the weekend and is expecting him to publish a report at the earliest possible opportunity.

“It is important that we have an independent assessment of the auspices of the Ceann Comhairle. He is the protector of members’ interests and standing orders.”

Mr Flanagan on Monday declined to apologise for having voted for other colleagues himself while in the chamber.

“There may have been times when people are passing through trying to get to their seated position. In such a situation a button may well be pressed in anticipation of that person taking their seat. That has happened on occasion.”

Mr Flanagan said there was a difference between voting for a colleague who was present in the chamber and those who were not present.

He said after the division bell, the doors are sealed after eight minutes and anybody inside is invited to vote.

“Anybody outside the chamber has no entitlement to vote,” he said. “That’s the issue here. A proxy vote is strictly prohibited under the standing orders of the Dáil and the Constitution. This is far from over. It is very serious,” he warned.

He said what Mr Collins and Mr Dooley were being investigated for “a completely different issue, because it seems that one of them had deliberately, with intent, absented themselves from votes, and that’s where the illegality is.”

Also on Monday Fianna Fáil’s Lisa Chambers said she mistakenly sat in her colleague and party deputy leader Dara Calleary’s seat last Thursday for one vote and moved to her own seat for the same vote as soon as she realised.

The party’s Brexit spokeswoman said she denied over the weekend ever having voted for anyone else, or asking anyone to vote for her, because she took that to mean that she “intentionally, knowingly, purposely” done so.

Ms Chambers said on Monday Fianna Fáil leader Micheál Martin accepted her explanation of how she voted for a party colleague in the Dáil.

Ms Chambers said she does not expect to be suspended from her front bench role - like party colleagues Mr Dooley and Mr Collins - because “what happened to me is very different.”.

“What happened with me was an honest genuine mistake,” she told RTÉ’s Morning Ireland.

“I honest to God believed I was in my seat, and I was pressing my voting button,” she said.

Minister for Communications, Climate and Environment Richard Bruton said TDs casting ballots for each other was “common practice”.

While saying a fellow TD has never voted for him when he wasn’t in the chamber, the Minister said: “If I was sitting in someone else’s chair ... and someone was sitting ... you know, I’d just say press my button, I’m here. That has become common practice. But what has gone wrong here is that people not in the chamber at all voted.”

Charlie McConalogue, Donegal North East TD and Fianna Fáil spokesman on agriculture, food and the marine told Highland Radio: “Under no circumstances should anyone be voting for someone who is not in the chamber."

Catherine Murphy, Social Democrats co-leader and Kildare North TD, said voting for absent TDs is “a breach of the Constitution” because it states elected representatives “have to be present and voting”.

“Leinster House makes its own rules, but it makes them in line with the Constitution and the Constitution is very clear: Article 15 says all questions in each house (of the Oireachtas) shall be determined by a majority of votes by members present and voting.”