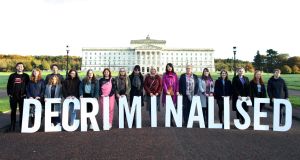 Pro-choice activists gather in the grounds of Stormont after the Assembly was recalled by MLAs wishing to protest against changes to abortion laws. Photograph: Paul Faith/AFP via Getty

Pro-choice and anti-abortion campaigners gathered before Stormont on Monday morning as a number of MLAs returned to the Assembly to demonstrate against changes in the abortion law.

Campaigner Sarah Ewart, who began a six-year challenge to the North’s abortion laws after she travelled to England for the termination of a foetus with a fatal abnormality in 2013, said it was a “massive relief”.

She said that not a day passed that she did not think of her daughter Ella, and while “it doesn’t fix what happened to me, it will make it better for others”.

Some 50 anti-abortion protesters bearing placards reading “not in our name” gathered and prayed around the statue of unionist politician Edward Carson in front of Parliament Buildings.

Mark Lambe from Co Antrim said he felt the legislation had been forced on the people of Northern Ireland without any consultation. And while it was “a sad day for Northern Ireland”, it was “only the beginning of the battle”.

“It will be very clear to people today where MLAs stand and I hope they bear that in mind when they come to vote in the next elections,” he said.

Gráinne Teggart of Amnesty International was one of a group of pro-choice campaigners at Stormont holding letters that read “Decriminalised”.

She said the change in law would pave the way for a more “compassionate” system. “From midnight tonight history will be made, these oppressive laws that have policed our bodies and our healthcare will be brought to an end,” she said.

“Finally our rights and our healthcare are being brought into the 21st century.”

The Northern Ireland (Executive Formation) Act, which was passed by the UK government earlier this year, provided for the decriminalisation of abortion in Northern Ireland and the legalisation of same-sex marriage in the event that the Stormont Assembly was not restored by October 21st.

Same-sex couples and marriage equality campaigners gathered at the Merchant Hotel in Belfast on Monday to celebrate with wedding cake, flowers and balloons before cheering on the steps of the hotel. Many held signs reading “equal”.

Christopher and Henry Flanagan-Kane, one of the UK’s first same-sex couples to enter into a civil partnership, said they would open a bottle of champagne at midnight.

“We have been waiting a long, long time for this,” said Christopher.

“It’s not just about me and Henry. We have a son as well and it is about his rights when he grows up, to grow up in a world where he is not equal just depending on sexuality. We had to grow up in the world like that, denied our rights. We just want the same rights as everyone else, to be like heterosexual couples.”