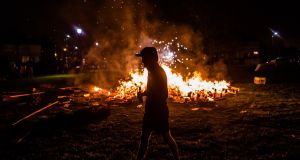 In 2018, more than 600 tonnes of bonfire material was removed from Dublin ahead of Halloween. Photograph: James Forde

TDs have called for the Garda overtime ban to be lifted for Halloween amid growing concerns about the stockpiling of dangerous bonfire materials.

His constituency colleague Independent TD Joan Collins said that last year “they nearly started a turf war” in parts of the city.

An annual public safety advertising campaign about fireworks, which are illegal in the State, begins today.

Mr Ó Snodaigh said that “if the overtime ban is not reversed there will be 50 per cent fewer gardaí on duty this year to give support to Dublin City Council” and Dublin Fire Brigade.

It was “bizarre” that at the busiest time of the year for gardaí, personnel are expected to operate with reduced numbers, he said.

Extra overtime was banned after the almost €20 million cost of security for US president Donald Trump and vice-president Mike Pence when they separately visited Ireland this year.

Mr Ó Snodaigh said that 175 tonnes of bonfire material, including 3,500 pallets, was removed last year in Dublin South-Central at a cost of €43,000, not including clean-up expenses. More than 600 tonnes was removed across the capital, he said.

The material was stockpiled dangerously in flat complexes, at the rear of shops, on derelict sites, at houses and in garages, he added.

When the issue was raised in the Dáil this week Minister of State for Justice David Stanton said the allocation of Garda resources was solely a matter for the Garda Commissioner. But he said €95 million this year in Garda overtime would be maintained for 2020.

Mr Stanton added that An Garda Síochána had measures in place in every division to prevent and detect the sale and importation of fireworks in the run-up to Halloween.

A policing plan known as Operation Tombola is in place to deal with bonfires and any associated public disorder and there is co-ordination with local authorities to ensure the removal of bonfire material, he said.

But speaking at the weekend, Mr Ó Snodaigh said that the Garda back-up would not be there for council crews this year. The crews go into different areas before Halloween to take out dangerous material.

Council workers need Garda back-up because of the threats from gangs, sometimes of up to 50 teenagers, he said.

“We are talking about very dangerous elements who cause major damage to public properties,” Mr Ó Snodaigh warned.

“Two years ago there was a ‘stand-off’ in the Drimnagh area,” and the Garda public order unit was called in.