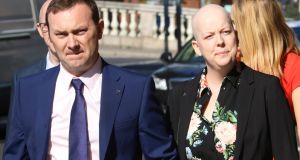 Paul and Ruth Morrissey pictured at the Four Courts last week where she is taking a legal action over the alleged misreading of her cervical smear tests. Photograph: Collins Courts.

Minister for Health Simon Harris says he is angry and upset that a woman with two forms of cancer, Ruth Morrissey, had to take her legal action over the alleged misreading of her cervical smear tests to court last week.

“Who in their right mind would want to see a terminally ill woman in court?” the Minister asked during an interview on RTÉ’s Today with Miriam programme.

He said there was a road block that needed to be overcome and that the Government was determined to work out a way to do so. It has asked a High Court judge to examine alternative approaches to compensation, including a redress scheme, for women affected by controversy.

Ms Morrissey (37), a mother-of-one from Co Limerick, and her husband Paul Morrissey have sued the HSE and the laboratory Quest Diagnostics Ireland Ltd along with Medlab Pathology Ltd. She has cervical cancer and breast cancer.

It is claimed there was failure to correctly report and diagnose smear samples taken in 2009 and 2012, and that her cervical cancer spread untreated until she was diagnosed in June 2014. It is further claimed a review of the smears took place in 2014 and 2015 but she was not told until two months ago that her smears were reported incorrectly.

Since a legal action taken by Limerick woman Vicky Phelan earlier this year, the Department of Health accepted that a total of 221 women could have received a different result from smear tests carried out under the national Cervical Check programme.

Mr Harris said he was frustrated that Ms Morrissey’s case had not been settled in mediation. “We want to get this right.”

he insisted that the Government’s response to the controversy was genuine and that an apology was due to everyone affected by what had happened.

“Everything that can be done is being done. We are determined that all will be done,” he said, adding that the Government was not letting the labs responsible for reading the tests “off the hook”.

When asked about the judicial led review announced by the Taoiseach, Mr Harris said it was important to come up with an alternative mechanism.

Asked how will issues such as negligence, quantum and liability would be determined, he added: “Nobody want to see an adversarial system, but what is the alternative?”

On the same programme, solicitor Cian O’Carroll, who represented Ms Phelan, said people were getting tied up in knots talking about liability.

He accused the State of “effectively hiding behind women” and maintained that mediation had not worked or resolved the cases of his client Emma Mhic Mhathuna and in another action known as ‘the K case’.

He said that Taoiseach had been correct in his first comments in May and would be right to pursue the labs for breach of contract as they were sub-contracted by the State.

The system does not have to be adversarial, he added.

Mr Teap said it was not the women of Ireland who signed contracts with the laboratories. “They shouldn’t have to take them on separately. The State needs to step in and go after the labs.”

He said the Taoiseach was being reactive rather than proactive.

“He should be getting out in front of this, putting something in place.”