Irish are 14th most susceptible to skin cancer, study finds

Ireland has 859 melanoma-related diseases per year, and hot summer will have knock-on effect 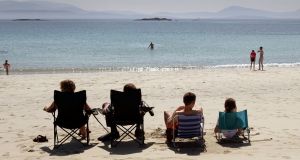 Ireland has been ranked 14th in a global table of skin cancer susceptibility, a new medical study shows.

New Zealand has the highest rate of skin cancer, according to the annual Skin Cancer Susceptibility Index. It is followed by Australia, Switzerland, Sweden and Norway. Ireland ranks behind Germany, and just ahead of Belgium.

The study is produced by Derma.plus, a German organisation that provides online dermatological advice from leading physicians. The United Kingdom was ranked 10th in the study, and the United States had the ninth-highest skin cancer rate.

The vast majority of the top 20 countries were in Europe, and the study examined 62 countries in total.

The skin cancer incidence score, ranging from 10 to one, is calculated on the basis of the number of new cases of melanoma disease in each country and the country’s overall population.

The index considers several other factors, such as the ultraviolet (UV) ray intensity, skin type, and the total amount of melanoma diseases per year.

Prof Dietrick Abeck, chief medical adviser at Derma.plus, said the amount of both non-melanoma and melanoma skin cancers “has increased dramatically over the past decades”.

“It’s how our Celtic skin reacts to the sun, we were not designed to sunbathe for long periods of time,” he explained. There were a number of factors behind skin cancer rates in Ireland, which have been increasing for several years, he said.

These included people travelling abroad more, an ageing population, the use of sunbeds, Irish people’s fair skin type, and poor practices when it came to people protecting their skin from the sun, he said.

The current summer of exceptionally warm and sunny weather will likely have an “impact” on skin cancer rates, he said.

“There is a time lag between the damage and the cancer developing, but you may see it down the road in 10 to 15 years,” he said.

Dr Ormond said one of our main misconceptions is “the Irish sun is different to the sun in Spain”.

“The biggest mistake we make is we equate heat to radiation. Concentrated radiation in Ireland in the middle of the summer is probably the same as Spain, but we don’t notice it because it isn’t as hot,” he said.

Many Irish people were unaware ultraviolet rays still had a harmful impact on skin even during cloudy days.

People often incorrectly assume using sun cream with a high factor was the best way to protect skin in the sun, Dr Ormond said, when the focus should be on avoiding long periods in direct sunlight, and covering up in the sun in the first place.