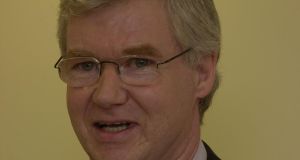 The problem lay in some hospitals not running tests to identify patients’ blood types prior to a transfusion being needed, leading to O negative supplies being used by default, a spokeswoman for the IBTS said.

The service reported a particular difficulty maintaining adequate supplies of O negative blood, which can be given to almost any patient. It is routinely used in cases where hospitals cannot confirm the blood type of the patient who needs a transfusion.

Guidelines advise hospitals to draw down blood supplies in line with the breakdown of blood groups in the population, so as not to put excess pressure on one group of donors. O negative donors make up eight per cent of the donor population, and should be used in at most 12 per cent of transfusions, an IBTS spokeswoman said.

Some hospitals in Ireland are drawing on O negative blood donations for up to 20 per cent of transfusions, which was “putting excessive demand” on O negative donors, the spokeswoman said.

Mr Kelly said hospitals will have to manage how they use the universal blood type donations better, and the IBTS would “take whatever steps are necessary to protect our O negative donors.”

The IBTS has asked the Health Service Executive (HSE) to follow up with “worst offender” hospitals in terms of high O negative blood type usage.

The IBTS spent €109,049 investigating a bullying complaint last year, after which an employee was fired.

The investigation, led by a human resources consultant, cost over four times more than initially expected. The expenditure did not go through a public procurement process to ensure value for money, as required for all contracts worth €25,000.

The employee who was the subject of the bullying complaint was fired following the probe. However, the decision to terminate their employment is the subject of an ongoing legal challenge, according to a spokeswoman for the IBTS.

The annual report said in 2016 a private consultant was “urgently appointed” to conduct the investigation, and the organisation did not anticipate the costs of the probe would exceed the public procurement spending threshold.

The cost and length of the investigation increased as the number of witnesses interviewed “expanded considerably,” the annual report said.

“The IBTS had no real option but to proceed with the investigation to conclusion, undesirable as the cost situation had become as to do otherwise would have totally undermined an independent investigation being undertaken,” the report said.

Prof Anthony Staines, chair of the IBTS board, said the organisation faced “one very challenging incident” in 2017. A patient was infected with Hepatitis B from a blood transfusion, after the infection was not picked up in the donated blood.

The donor was diagnosed with Hepatitis B some time after they donated blood, and the IBTS were informed by the HSE. The infection occurred after the blood donation was made in the “window period” when the virus cannot be detected, even by the most sensitive tests available.