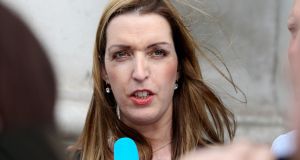 Vicky Phelan is to meet the Taoiseach regarding the CervicalCheck debacle. Photograph: CourtPix

The “vast, vast majority” of the 221 women affected by the CervicalCheck controversy had their screenings misread through negligence, a solicitor for some of the women has said.

Cian O’Carroll represents Vicky Phelan, Emma Mhic Mhathúna and Ruth Morrissey – all of whom have taken cases against the HSE and the laboratories used by the screening programme.

The solicitor was responding to comments from Taoiseach Leo Varadkar that litigation might be required in some cases as not all false negatives were a result of negligence.

Mr O’Carroll said the Taoiseach was being “irresponsible” and trying to “muddy the issue” by making this point.

“Of course not all false positives are negligence. I myself have made that point. In fact the vast majority of false negatives are not negligent,” he told The Irish Times.

However he said the 221 women identified by CervicalCheck were specifically selected because “their tests were misread to a significant degree and it had resulted in a delay to their diagnosis and treatment”.

He said he could not say negligence was a factor in all the cases but the indications are the vast majority fall into this category. Mr O’Carroll said experts recruited to analyse the 221 cases have so far processed about 40 of them.

“They feel that all of those so far involve a breach of duty of care,” he said.

“So the indications are that the vast majority will be a breach of duty.”

Mr O’Carroll said it was not the women who are forcing these matters to court but the HSE and the labs who are acting together. Promises by the State to settle with the women and then go after the labs for compensation have not been fulfilled, he said.

“I believe the Taoiseach and the Department of Health have it within their remit to make that happen,” solicitor Caoimhe Haughey, who is representing some of the affected families, told RTÉ’s Six One News. “Spare these victims going to court.”

Meanwhile, Ms Phelan said she was seeking an urgent meeting with Mr Varadkar this week. “I want the Taoiseach to step up and do something to protect these women. It is inhumane to watch.”

Ms Phelan said settling the cases would be more expedient for the State, rather than paying huge legal fees.