GP shortage: ‘I didn’t see any future in Ireland’ 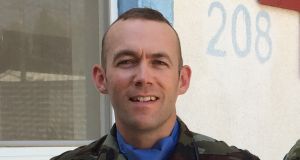 “They could often not take holidays as there was no cover, they would do unpaid house calls in the evenings after work. Although they did it largely without complaint, I could see how this could lead to burnout,” Caden says.

“The GPs I worked with were tireless in their work for their communities and invested heavily in their practices, some in primary care centres, only for the Government to unilaterally slash the practice income by 38 per cent.”

“So far, unfortunately I have seen nothing to show that they are serious about this, and I have a significant concern that general practice as we know it will be killed off by this Government. This will impact on the poorest and most vulnerable, who disproportionately rely on general practice.”

Last home for a holiday in October, Caden sees little hope of returning as working conditions for GPs remain difficult.

Dr Dermot Coffey was easily persuaded to leave his homeland in 2002 with his partner due to the “awful working hours” for doctors in Ireland at the time.

“The conditions weren’t even the worst they had been – we at least got paid for the hours we worked – but I remember working out we averaged 78 hours a week that whole year, and every fourth week was 100 hours,” he says.

Coffey and his partner (now wife) headed for New Zealand where they live with their three children, despite a few stints working in Ireland in 2004 and 2009.

A recent holiday to Ireland prompted him to think about his reasons for leaving and roused mixed feelings on returning.

“Like a lot of people I imagine I’ve felt the pull back a lot more strongly since we’ve had kids, and although I’ve a brother and his family out here now, the distance seems a lot further than it did when we moved 16 years ago,” he says.

“I’ve never been one to hold with the view that medicine is a ‘vocation’, or that Irish graduates should be bonded to the country, but I have felt in more recent times a feeling that we as medics should all be chipping in to help the Irish health system, and a desire to make whatever little difference I could has added to the drawback.”

Coffey finished his GP training in 2007, worked as a GP in Wellington until 2016 and has just returned to work in Christchurch after spending two years in Melbourne, where his wife completed training as a geneticist.

“Would I come back? I would. I wouldn’t expect perfection but I’d like to see some hope for general practice first.”

Motivated less by a desire to avoid the challenging working conditions in Ireland and more by a yearning to care for some of the world’s poorest populations, Commandant Dr Patrick Kelly joined the Defence Forces in 2014 after completing his GP training in Ireland.

Kelly is acting senior medical officer with the UN’s Quick Reaction Force, and will leave Syria for a holiday in Ireland in August. He will enjoy a three-week break here before returning to the Golan Heights as part of the UN mission, hosted by the Syrian Arab Republic.

The Waterford native became a member of the Order of Malta aged 12 and grew to appreciate caring for people and the human element of healthcare.

“A career in the Defence Forces has offered me the opportunity to provide healthcare to people who really need it; refugees, internally displaced populations or to persons living in resource-poor settings. I’ve been able to care for various groups from orphans of the Ebola outbreak in Sierra Leone to internally displaced persons as a result of the Syrian civil war.

His current role is to provide for the primary care needs of 130 soldiers, as well as preventing the outbreak of disease, which can occur in people situated in close quarters.

His other role is as a doctor of the Quick Reaction Force, which is in effect an emergency service for UN unarmed military observers who are overseeing the area of separation between Israel and the Syrian Arab Republic as part of the UNDOF mandate.

Kelly says he may one day consider working in Irish general practice, but for now, on the whole, enjoys the variety offered by his work abroad.

“You miss family events, but you have to take the good with the bad,” he says.

The Kildare native graduated in medicine in 2004. Since then he has moved city and country 11 times.

In 2011, he went to Switzerland. O’Sullivan wanted to be an interventional cardiologist and there was no training opportunities in Ireland.

“The main reason people move is for training, I think,” he says.

“When you’re training in Ireland you have a very pessimistic outlook of the future . . . I didn’t see any future in Ireland. I felt that I had to go abroad and make the most of it over there.”

Amid the pessimism and lack of training opportunities in his chosen speciality O’Sullivan, a qualified doctor, made the difficult decision to move abroad to train, unpaid.

“When you move abroad first you don’t get paid, you don’t get a salary for working for the hospital and have to find your own funding. When I moved to Switzerland first I got a grant from the HSE that lasted a year . . . then I was lucky to get another grant for a year.”

Last year, he and his wife had a child, which he says “was the impetus for us to come home”.

Looking for a job in Ireland, he spoke to “very disillusioned” colleagues working in the public sector due to consultant pay concerns and limited resources.

Having specialised in innovative, new valve procedures in Zurich, O’Sullivan wanted to continue this work in Ireland and private hospitals, with superior resources, offered better opportunities, he says.

He has taken up a role in the Bon Secours Hospital Cork and is excited about the positive outlook there. Whereas the outlook within the public sector “appeared to be more negative”, he says.

Irish academic fellow in geriatric medicine Dr Mary Ní Lochlainn, who works for the National Health Service in London, says she cannot “imagine ever not being paid for my work or having to chase my due pay” unlike her Irish counterparts.

Ní Lochlainn has never worked for the HSE and has only been in Irish hospitals as a medical student, but even as a patient here found the two-tier health system “very troubling”.

She chose to move abroad for a number of reasons.

“I was influenced by many fantastic consultants in geriatric medicine as a medical student in Trinity, all of whom had spent time training in the UK. So I definitely felt I would go to the UK at some point. I also moved for the training opportunities and to experience the NHS, as well as the more forgiving hours and better working conditions.

“The NHS is the most incredible system, I feel deeply privileged to work there. Money is never a consideration in my day-to-day clinical work, nobody mentions insurance, and everyone gets the same treatment regardless of their class/colour/creed/bank balance. It is not perfect, with Tory-underfunding, but nevertheless it is a phenomenal institution.”

Ní Lochlainn, like junior doctors in Ireland, must move hospitals as part of her training post. But, she only moves between hospitals in south London.

“I don’t have to move to opposite ends of the country away from loved ones, moving house regularly, etc. This is a big consideration of mine when I think about moving home,” she says.

Most importantly, she believes unequal pay for consultants is a huge factor for Irish doctors abroad. “Why should those of us who qualified later be penalised and paid less for the same work?” she asks. “It is utterly demoralising. I worry about my parents and extended family being in Ireland where the waiting lists are ever growing. Unless we sort out this demoralisation, there will be more empty posts, and no doctors to clear these waiting lists.

“I’m not sure the general public realise that they are the ones who will suffer if these issues are not resolved by Government as soon as possible.”