State has a ‘critical’ reliance on UK for medicines, according to industry watchdog 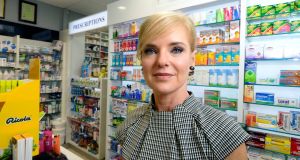 Standing behind the counter of her busy suburban Dublin pharmacy, Ann-Marie Horan is worried.

When the heavy snow came earlier this year, disruptions to her normally twice-daily deliveries of medicines threatened many of her customers in Terenure.

She was just about able to manage often life-saving supplies during the “Beast from the East” weather event. But it took weeks for things to get back to normal.

“Brexit is a much bigger problem than the snow,” she says.

Ireland has a “critical reliance” on the UK for its medicines, according to the Health Products Regulatory Authority (HPRA), the industry watchdog. Six out of every 10 products in your local chemist shop is made in or is shipped through Britain.

Distribution is a finely-honed operation. It has to be. Many medicines fly out of the pharmacy as fast they come in and others have to be kept in very specific storage conditions.

“It is a very tight ship,” says Horan. “It is not that there are weeks of supplies in a pharmacy – there is not. Same with the wholesalers, they typically keep just a few days of drugs. If there was a problem with delays because of Brexit, it would happen really quickly.”

During the snow there were delivery delays of up to a day and half.

“Even within that small timeline, that is very serious,” she says.

“If you are a diabetic and need insulin injections, that [delay] can affect your life. It couldn’t be more serious.”

Because they will no longer be in the EU, pharmaceutical manufacturers in Britain face having to retest all their medicines in an EU country before they can be distributed within the bloc.

The HPRA says it is already planning for a “worst-case scenario” hard Brexit and the extra restrictions it could bring, and therefore potential delays.

But it points out much of what will happen comes down to the contingency planning of the pharmaceutical companies themselves.

“The HPRA’s planning for Brexit includes consideration of medicines that come from the UK or which are supplied to Ireland through the UK,” a spokeswoman said.

“However, while the HPRA regulates the distribution of medicines in Ireland, the precise post-manufacturing supply routes for individual medicines are a matter for individual companies provided that compliance with regulatory requirements is ensured.”

For the same reason, it said it cannot give a definitive list of medicines that come to Ireland from or through the UK.

An added issue is medicines transported to Ireland through the UK, from the likes of Germany and Holland.

The HPRA said it is “agreeing approaches” with everybody involved.

Nonetheless, it admits it can not fully determine the specific impact on the supply of individual medicines until the precise details of the final Brexit outcome – deal or no deal – are known.

AstraZeneca, one of the biggest pharmaceutical companies in Britain, whose top-selling drugs treat cancer, heart conditions and diabetes, is confident its preparations are far enough advanced to avoid any disruption.

“We think it is going to be fine,” says Gonzalo Vina, global media relations director with the company.

In a three-pronged Brexit strategy, it has set up new testing facilities in Sweden, so all their products will be EU-regulated, it is talking to port authorities to eliminate any potential distribution issues and is increasing its stock “buffer” levels for manufacturing.

One drug it is concerned about is Zoladex, used for prostate and breast cancer.

It is already being produced at full capacity, so the company can not increase its stock.

“In the event of things being difficult, we would go to the [Irish] regulator and say you have been using this, we have been testing it for how many years – it is kosher, let it through because people need to take this stuff – and they would,” says Vina.

In her Fortfield Pharmacy in Terenure, Horan says all the uncertainty is making her and her colleagues uneasy.

“It is such a huge deal that you’d think something would be sorted out before Brexit actually happens,” she says.

“Pharmacists are talking about this and we are concerned that there won’t be an agreement and that there will be drug shortages.

“We are at the frontline of that. I’m the person that has to explain to somebody that I don’t have their drug for them. I will do my utmost to get that medication but if I can’t get it, I can’t get it.”

Horan says it would be “horrific” for pharmacists to be put in that situation.

“I think the public needs reassurance because ultimately, yes, the pharmacists have to tell the public, but it is the public who will be the people without medication,” she adds.

“You do hope there is something happening behind the scenes and the authorities are sorting it out or have a plan B.

“It is bleak to be hoping that it will be sorted out. But I hope the authorities aren’t just hoping too – that they are actually doing something about it.”

Is she confident they are? “No. Because I don’t know anything about the preparations. I just don’t know.”