‘Someone has to be an accountable for her death... I just want to know who, what, when and why?’ 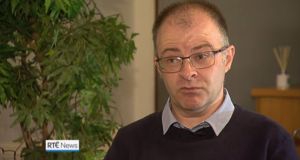 Ben Lawless: ‘I never thought I would be a widow at 44 years of age’. Photograph: RTÉ News

The husband of a woman who died due to cervical cancer has said he wants someone to be held accountable for CervicalCheck failures.

Ben Lawless said his wife Edel, who was 45, was one of over 200 women not told their smear tests had been audited.

Mr Lawless told RTÉ News his wife had a CervicalCheck smear test in 2011 and 2013 but was not diagnosed with cancer until around August 2014.

She underwent treatment and had been given the all-clear in April 2015.

However, the cancer returned and Ms Lawless died on October 31st 2017, on the anniversary of the couple’s wedding.

“She started treatment and soon after she was diagnosed and had six weeks of radiation five days a week and chemo one day a week which was very hard on her,” said Mr Lawless.

“When she was given the all clear the following year in April 2015, we went to see a radiologist to get a few scans. He saw no re-occurence and we gave him a big hug,” he said.

“I noticed a few weeks before my wife passed away that she was really, really sick and looked like she was deteriorating rapidly. I knew in my heart of hearts she was dying. My wife slipped into a coma and never woke up. She passed away four days later. She passed away on our wedding anniversary on the 31st of October... It was the most devastating, horrible news I had ever been given,” he said.

Mr Lawless recalled the moment when he learned that his wife was one of over 200 women whose smear tests had been audited.

“On the second week of June I got a phone call from the woman who works in the HSE. I asked her was she (his wife) one of the women who had passed away but she just said she (his wife) was was part of the scoping inquiry into the 200 women,” he said.

CervicalCheck identified 221 women who, on look-back audits after being diagnosed with cancer, were found to have received incorrect smear tests that could have resulted in different outcomes.

Mr Lawless thanked Vicky Phelan for her work in highlighting the cervical check scandal and called for accountability for his wife’s death.

“Someone has to be an accountable for her death. There’s not a day that goes by that I don’t shed a tear for my wife,” he said.

Mr Lawless said he and his children were devastated by her death.

“She was a bit wild and that’s what I loved about her. We were totally different - she was very loud and I was really quiet. I never thought I would be a widow at 44 years of age and my wife would be dead,” he said.