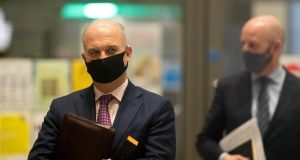 Ireland is experiencing “exceptionally elevated” levels of Covid-19 amongst people aged over 85, the chief medical officer Tony Holohan has warned the Government.

In a letter to Minister for Health Stephen Donnelly, Dr Holohan warned that the impact on the ongoing high level of disease transmission is “stark”.

Significant concerns are raised about outbreaks in hospitals and nursing homes while Nphet also warned that the reported number of reported outbreaks are likely to be an underestimate.

The letter, published on the Department of Health website, is dated January 21st .

Dr Holohan also said that in a single day last week there were 14 new outbreaks in nursing homes. He warned that despite work to support nursing homes “the risks in these services can not be fully mitigated.”

“We have seen rapidly increasing incidence in long-term care settings and vulnerable groups. Due both to the number and scale of outbreaks being observed, we are seeing increasing mortality and expect a large number of additional deaths in the coming weeks.”

Mr Holohan pointed out that there is no evidence of a change in morbidity in comparison to previous waves and that the disease remains just as virulent as ever.

While the community has made “great progress” in radically reducing transmission of Covid-19, Ireland remains in a “very vulnerable position.”

“We will all find it challenging to maintain the very low levels of social contact and the careful adherence to distancing and hygiene measures required to maintain suppression, and it is likely that the effective reproduction number will drift upwards in the coming weeks.”

The UK variant of the virus will also drive the reproductive number up, he said.

“It will therefore become increasingly difficult over the coming weeks to maintain the level of suppression that we have achieved since the New Year.”

Under modelling, the public health team has projected there may be between 1,400 to 1,700 cases per day by the end of January and 200 to 900 cases by the end of February.

Despite this, optimistic predictions are unlikely to come to pass, Nphet said, with 400 to 700 cases per day by the end of February more likely.

While the team recommended that Level 5 restrictions be extended to February 28th, the Government decided to extend them until March 5th in line with similar moves in the North.

Nphet also recommended that in order to safeguard progress with positive test numbers, the HSE should reinstate the testing of close contacts with a single test at day five. With time, this should be increased to two tests.