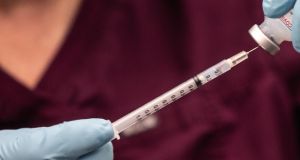 Vaccination of over-70s against Covid-19 is to start next month despite supply difficulties, Minister for Health Stephen Donnelly has said.

Assuming authorisation of the Oxford/AstraZeneca vaccine by the European Medicines Agency later this week, older people will be vaccinated in the order: 85 and older, 80-84, 75-79 and 70-74, according to the Minister.

The delivery to Ireland of the AstraZeneca vaccine will be “at the lower end” of expectations for February and “considerably lower” than originally stated by the company for March, he admitted.

Those most vulnerable to Covid-19 would continue to be prioritised “against the backdrop of limited supply of vaccines”, he said.

The Minister advised people did not need to take any specific action “for the moment”.

“The next stage of our vaccine programme will begin with those aged 85 years and older and will be administered initially through GPs in their surgeries.

He said “every possible resident” of nursing homes has received one dose by now. Over the coming weeks, second doses will be administered to 77,000 healthcare workers.

The administration of first doses in long-term care facilities was scheduled to be completed by last Sunday, but the HSE says that because of virus outbreaks, four facilities were not included in the first series of vaccinations, and 120 were not completely done due to active outbreaks.

These will be revisited “at the appropriate time”, a spokeswoman said.

The HSE says 45,000 healthcare workers will this week receive a second vaccine dose, as will about 3,000 residents and staff in long-term care facilities.

Mr Donnelly said that as of Sunday, 143,000 Covid-19 vaccine doses had been administered, slightly above target.

On the supply side, Ireland is set to receive 32,760 doses of the Pfizer/BioNTech vaccine this week, compared with 24,750 last week when deliveries were suppressed due to manufacturing upgrades undertaken by Pfizer in its European plant.

A company spokeswoman said it was expected deliveries would increase to about 41,000 a week next week, rising to 50,000 in March.

Under EU purchasing agreements, Ireland could receive as many as 6.6 million doses of the Pfizer/BioNTech vaccine, most of them later in the year.

The HSE said the schedule of delivery of vaccines under the EU’s advanced purchase agreement remains “fluid”.

“Vaccine rollout plans must be flexible to accommodate unforeseen events and to operate in what is an evolving situation internationally.

“We are not currently providing the sequencing for vaccine rollout in each of the various cohorts as schedules of delivery are confirmed on a rolling basis.

A number of groups, including transplant patients and people with cystic fibrosis, have appealed to be accorded a higher priority in the Government’s rollout of vaccines.

“All of the priority groups will be covered as further vaccine supplies become available and the immunisation programme is rolled out nationally. The HSE is working in line with the Government prioritisation,” the HSE spokesman said.

Although the publication of daily vaccination figures has been promised, the HSE has a backlog of figures to input and validate, according to Mr Donnelly.