Mayo's Clare Island one of State’s most infected communities

Islanders are very concerned at the scale of the infection, which they blame on socialising over Christmas 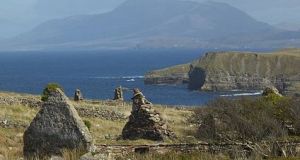 Based on the cases on the island, Clare Island would have an equivalent incidence rate of 12,500 cases per 100,000 people. Photograph: Getty Images

Clare Island off the coast of Co Mayo is experiencing a Covid-19 outbreak that has infected about one in every eight of its 160 residents.

About 20 people have tested positive for the disease, making the mountainous island at the entrance to Clew Bay one of the most infected communities in the country.

A public health team travelled to the island by ferry last week to carry out tests on suspected Covid-19 cases, assisting the two public health nurses who live there.

Islanders who spoke to The Irish Times but declined to be named said they were very concerned at the scale of infection, which they blamed on socialising over Christmas.

“We haven’t had to transfer anybody to hospital yet and hopefully that will remain the case,” said Achill-based GP Dr Noreen Lineen-Curtis, who normally travels to Clare Island once a week.

She has not visited Clare Island since before Christmas as she was concerned about the high infection rate in Achill and was afraid that she would be an asymptomatic carrier and bring it out to the island. Instead she has been carrying out phone consultations with her patients.

“I would normally go out once a week, on a Wednesday. I don’t feel it safe yet to go out. If I go, people come to the clinic. I don’t want to risk anyone coming out of their homes,” she said.

“It has calmed down. I am not referring loads more for tests at the minute. Hopefully that is the end of it, and that we have contained it.”

Still, the doctor said she was “very concerned” at the infection rate amongst the islanders. “I am worried and will be until the last person has fully recovered. It is so unpredictable – who is going to get sick and who isn’t.”

Mayo has the second highest infection rate in the country with 1,213 cases per 100,000 people.

Clare Island falls within the Westport local electoral area, which had 198 cases over the 14 days to January 18th, giving the locality an incidence rate of 1,077 cases per 100,000 people.

Based on the number of cases on the island itself, Clare Island would have an equivalent incidence rate of 12,500 cases per 100,000 people.

This puts the island at more than twice the rate of infection in Belmullet, the local electoral area with the highest infection rate in the State and 16 times the current national incidence rate.

“It is really high,” said Dr Lineen-Curtis. “It has been very contagious.”

She said Clare Island managed to avoid any cases of the disease during the busy period last summer. She puts the infection rates down to increased socialisation over the festive period, and people visiting between the island and mainland over the Christmas period and trips to local pubs.

“The vast majority of people have been – and remain – highly vigilant, but just a couple of slips at Christmas when you feel you are safe and that is enough,” said Dr Lineen-Curtis.

“Achill escaped it during the summer. The incidence rate was just so low in the country. That is what saved us in the summer. But that socialisation over Christmas was our downfall.”