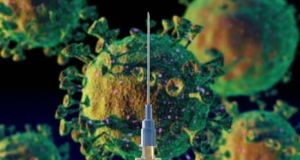 Minister for Health Stephen Donnelly told reporters on Tuesday that 65,000 vaccines had so far been administered to residents and staff in long-term residential care. Photograph: Getty Images

A Covid-19 outbreak in a nursing home near Dundalk, Co Louth has claimed the lives of six residents and infected almost half of the people living at the care facility.

Blackrock Abbey Nursing Home told family members of residents last week that there were 30 residents who had tested positive for the coronavirus disease at the 62-bed care facility.

The first dose of the Pfizer-BioNTech vaccines was administered to residents and staff on January 19th, including to one resident who tested positive for Covid-19 in the days afterwards.

The benefit of the vaccine does not start to be felt until about 12 days after being administered. Infected residents and staff are not permitted to receive the vaccine for four weeks.

Blackrock Abbey told relatives of residents last week that it was hopeful that Covid-19 cases had “plateaued” and would reduce significantly. The first case was detected on January 5th.

Alan Hynes, the manager of the nursing home, told relatives in an email that vaccinators will return on February 15th to give residents who received the first dose, their second “top-up” dose.

In an email on Wednesday, he said the “vast majority” of residents with the virus will have completed their isolation period by Thursday with a further nine completing early next week.

“Sadly, since our last correspondence, a number of our residents have passed away. This has been a very challenging time for everyone, not least for the families involved,” he said.

He added: “While it very much looks like we have ‘turned the corner’ and can see some ‘light’ ahead, we are in an unpredictable environment which is subject to change at very short notice.

“Hence, we remain very cautious as we have clearly seen that each person can react differently to the virus, even for a period after their isolation has completed.”

Louth is the country with the third highest Covid-19 infection rate in the country.

New figures show that there are 168 open outbreaks in nursing homes with 27 new outbreaks being recorded in the week to January 23rd and 654 new cases linked to the outbreaks.

Deaths linked to nursing home outbreaks in the third wave stands at 247.

New figures show that the positivity rate in the latest round, the seventh, of serial testing of nursing home staff has jumped to 2.17 per cent, a seven-fold increase since the start of December.

The Government has been told that the scale of the outbreaks and detection in staff arising from serial testing was causing major challenges to safe staffing levels in some nursing homes.

It was informed that, as a consequence of this, the HSE was unable to continue to provide further staff to support private nursing homes where staffing issues were of most concern while managing similar staffing challenges within its own services.

The Government discussed whether the scale of risk may not be fully mitigated as a result.

Second doses of the vaccine be administered in 27 nursing homes this week after 65,000 vaccines were given to residents and staff in the first round of doses completed by last Sunday.

The HSE said that Covid-19 outbreaks prevented four long-term care facilities being included in the first dose of vaccines on public health advice.

A further 120 care facilities were “not completely done due to active outbreaks”, it said.