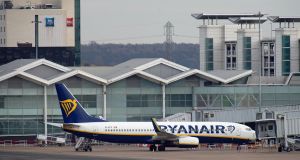 Ryanair is challenging more than a dozen state bailouts for airlines across Europe. Photograph: PA

Germany’s €6 billion recapitalisation and a state guarantee for a €3 billion loan “discriminates unlawfully between EU airlines”, Ryanair said in an emailed statement on Thursday. The carrier filed its challenge at the EU’s General Court on January 22nd.

“It is extraordinary that Lufthansa announced it did not need so much state aid, yet the German government was committed to favouring its ‘global champion’ instead of putting measures in place to support air traffic recovery in a manner that would benefit all airlines delivering traffic at German airports,” Ryanair said.

Ryanair is challenging more than a dozen state bailouts for airlines across Europe over concerns the cash boost for rivals will allow them to emerge stronger, slash fares and swallow up others. The company fears burning its own cash reserves while others get government rescue packages.

Its legal filings target European Commission approval for state support, claiming the EU regulator isn’t living up to its task of ensuring governments don’t unfairly help one favoured company at the expense of others. The EU court can cancel such approvals. The regulator has been under pressure to approve unprecedented state aid to save the pandemic-struck European economy.

The commission declined to immediately comment. Lufthansa and the German finance ministry did not immediately respond to requests for comment.

Lufthansa fought against EU demands last year that it make concessions, including key airport slots at Frankfurt and Munich, to balance out the harm to competition from the aid. Those terms effectively prevent Ryanair from taking the slots at Frankfurt as they are only available initially to new entrants at the airport.

The commitments “are totally inadequate to remedy the distortion of competition”, Ryanair said.

Last year, Michael O’Leary, the company’s chief executive, accused Lufthansa of “going around hoovering up state aid like the drunken uncle at the end of a wedding, drinking from all the empty glasses”.

European carriers are already among the companies worst affected by Covid-19 as governments restrict travel to prevent the virus from spreading. With profits heavily dependent on the April to September period, another lost summer this year could reach beyond industry stragglers and strike at leading low-cost carriers and tour operators.

Competitor concerns about the bailout intensifying Lufthansa’s grip on the German market might have increased after the German airline chief executive Carsten Spohr last week said the airline doesn’t expect to use all the funds. Germany’s 25 per cent plus one share stake in Lufthansa has also soothed investor concerns about a potential insolvency, lowering the carrier’s borrowing costs in recent bond issuance, funds that could be used to fight a price war.