Restrictions may be eased to Level 4 after March 5th, Varadkar says 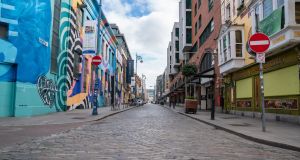 Quiet Dublin city streets: Plans to suppress the disease and prevent further surges will likely see strict curbs in place for many sectors until the middle of the year. File photograph: iStock

An easing of Level 5 Covid-19 restrictions is expected from March onwards but plans to suppress the disease and prevent further surges will likely see strict curbs in place for many sectors until the middle of the year.

Tánaiste Leo Varadkar told a meeting of the Fine Gael parliamentary party on Wednesday night that the country may move to Level 4 measures or “Level 4 with modifications” after March 5th.

Under Level 4, the main priority is to keep schools and childcare services open but citizens are also allowed to travel around their county instead of facing a 5km limit for all but essential reasons.

Taoiseach Micheál Martin said the vaccine rollout would give the Government further choices for easing restrictions towards the middle of the year, which likely means that hospitality and other sectors will face curbs for some time yet. He told a meeting of the Fianna Fáil parliamentary party that “the country will reopen in time” but the key is “to suppress the virus and get a critical mass of the population vaccinated”.

A further 54 deaths from the disease and 1,335 new cases were reported on Wednesday. Chief medical officer Tony Holohan said that despite recent improvements in key indicators, the “14-day incidence remains more than double the peak” recorded when the State was under Level 5 measures in October.

Mr Martin also told his TDs and Senators that almost half of those who flew into Ireland on Wednesday were returning from holidays. He said that 800 citizens arrived into Ireland, of which 397 had been on holidays.

The Government this week announced plans to quarantine some of those arriving in the State at designated facilities and others at home. Garda representatives said the prospect of gardaí monitoring whether people were at home presented serious operational and logistical challenges.

Mr Martin said the travel legislation was being drafted and regulations were being progressed this week. The Department of Health – which is tasked with implementing them – was unable to offer a firm timeline on when the various measures agreed by the Cabinet would be in place. It said the Government was examining getting these measures into operation as “ a matter of priority”.

Minister for Justice Helen McEntee has directed that visa-free travel be banned from South Africa and most South American countries, except for in exceptional circumstances, due to the emergence of Covid-19 variants.

On vaccines, Mr Varadkar told his parliamentary party that up to 100,000 vaccinations were expected to be administered weekly during April. He said the next few months would be “grim” but he remained “optimistic” about the summer.

He also said the European Union was taking a hard line in demanding that AstraZeneca honoured its contract to deliver vaccines to the bloc amid a row over the numbers due to be made available. The product is expected to be authorised for use by the European Medicines Agency (EMA) on Friday, which would allow Ireland to start using it from next week.

Minister for Health Stephen Donnelly has told TDs in a letter that, following a decision on AstraZeneca this week, he would be publishing a new provisional timeline for the vaccination of all groups.

The Government now expects that it will be early April when the Johnson&Johnson vaccine comes before the EMA for authorisation. The vaccine has been widely anticipated as it will only involve one dose and is easier to transport than others.