Highest-earning individually named GP earns in excess of €820,000 in fees 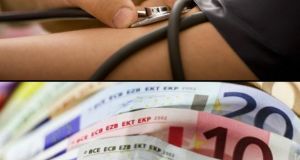 Among those on the list of the top 100 payees is Fianna Fáil Senator and Mayo GP Keith Swanick, who received over €494,000 during the year.

The State’s 100 top-earning GP practices and co-operatives shared gross payments of more than €53 million from the HSE in 2015.

Twenty GP practices and co-operatives received payments of more than €500,000 from the Health Service Executive (HSE) last year for their participation in the medical card and other State primary healthcare schemes.

Excluding co-operatives, the highest-earning individually-named GP was Dr Andrew Jordan, whose two practices in Dublin were paid €827,474 in fees and supports by the HSE.

The next-highest individual on the list was Dr Austin O’Carroll, whose practice in Dublin city was paid €808,286.

Medical organisations said the publication of the figures, which were released by the HSE after an appeal under freedom of information, gives a misleading impression of GP incomes.

“The figures are not salaries,” said Dr Pádraig McGarry, chairman of the Irish Medical Organisation GP committee. “They are gross fees out of which the GP has to bear the substantial costs incurred in providing services to enable them to treat 2.5 million patients under the schemes.”

The National Association of GPs said Dr Jordan and Dr O’Carroll each employed about 20 staff. “The GP principals mentioned pay GPs, nurses and admin staff to deliver services to patients. GPs receive, on average, €9 per month for each medical card patient irrespective of whether they attend once or 10 times over that month,” said chief executive Chris Goodey.

The highest recipient in 2015 was Care Doc, which is an out-of-hours doctor service operating in Carlow and Kilkenny. It was paid €2,578,863 by the HSE under the various medical schemes.

Care Doc is the business name of Carlow Emergency Doctors on Call Limited, which reported a total income of nearly €16,330,877 in the most recent accounts filed to the Companies Office.

The next-highest beneficiary under the schemes was North Doc Medical Services, which provides an out-of-hours service for patients in North Dublin. It received €1,852,376 from the HSE and reported total income of €3,224,975 last year.

North East Doctor on Call (NEDOC) Limited was third on the list of top-earning practices, receiving €1,544,346 from the HSE for participating in the schemes. Kildare and West Wicklow Doctors on Call (KDOC) was paid €1,520,379 by the HSE last year.

Among those on the list of the top 100 payees is Fianna Fáil Senator and Mayo GP Keith Swanick, who received payments totalling €494,084 during the year.

Under the General Medical Services contract, participating GPs receive a range of fees and allowances in respect of each medical card and GP-visit card patient on their list.

Annual capitation payments are made to GPs regardless of whether or how often a patient visits their doctor during the year. Other grants are paid in respect of practice expenses, study and annual leave.

The highest individual payment by the HSE to a dentist for 2015 was €354,060 to John Heeney in north Dublin. Eamon Thomas Noonan in Limerick received €330,404 under the dental payment schemes and Mayo dentist Shane Cadden received €294,753.

The highest payment to a pharmacy, was the €1,052,524 paid to Median Healthcare Services in the Dublin southwest HSE area. Company records show it is majority-owned by overseas entities registered in the British Virgin Islands.