Irish people living longer and among most fertile in Europe 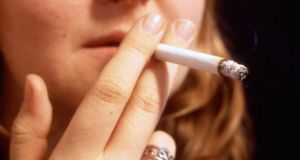 People in the Republic are living longer, are less likely to die of coronary disease and cancer, and rank among the most fertile in Europe, trends for the past 10 years show.

According to statistics released by the Department of Health, the nation has a high self-perception of wellbeing and where people are increasingly turning away from cigarettes.

Health in Ireland: Key Trends 2016, examines demographics, population health, hospital and primary care over the last decade and gives an overall picture of the State’s health. The report shows the “many significant achievements” in terms of key outcomes, the department said.

“Life expectancy has increased by almost two and a half years since 2005 and has been consistently higher than the EU average throughout the last decade,” it said.

Much of this is due to significant reductions in major causes of death such as circulatory system diseases and cancer. Since 2006, there has been a reduction in deaths for most major causes and the overall mortality rate has fallen by 16.7 per cent.

People are living longer and the State has begun to catch up with other European countries as the population of those aged 65 years and over has increased by 32.8 per cent since 2007.

The number of people in this age group is expected to almost double in the next 20 years.

The State continues to have the highest levels of self-perceived health of any EU country, with over 80 per cent rating their health as good or very good in 2014. There has been a 12.8 per cent decline in the age-standardised death rate for cancer in the last decade.

In the last 15 years there has been significant improvement in survival rates among breast and colorectal cancer.

However, survival rates from breast and cervical cancers are lower in Ireland than the average for OECD countries, as are those for colorectal cancer.

While there has been a reduction in deaths from respiratory diseases (including cancers) of almost 3.6 per cent since 2010, the rate is still 40.3 per cent higher than the EU28 average.

Cigarette consumption, excluding “roll your own”, has declined over the past decade while alcohol consumption increased slightly in 2014 and remained steady in 2015.

Binge drinking is highest among younger age groups and Ireland has slightly higher levels than the EU average.

The percentage of mothers who breastfeed after leaving hospital has increased steadily in the last decade, recorded at 58 per cent in 2015.