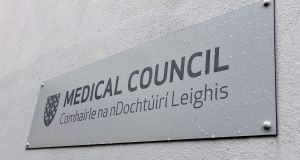 Eight months before a woman was diagnosed with cervical cancer at Midland Regional Hospital, Mullingar, a scan showed abnormality in her cervix, a Medical Council committee has been told. File photograph: David Sleator/The Irish Times

Eight months before an 80-year-old woman was diagnosed with cervical cancer at Midland Regional Hospital, Mullingar, a scan showed abnormality in her cervix, a Medical Council fitness-to-practise committee was told on Wednesday.

The committee also heard that the woman, Mary Hughes, from Co Longford, attended the emergency unit at the hospital nine times before she was correctly diagnosed.

Dr Nazia Amer, a radiologist at the hospital, said that in February 2010 she reviewed one of Ms Hughes’s scans and reported a suspicious structure in the cervix.

She said she suggested in her report that there should be further evaluation of the abnormality, but this was not carried out at that time.

Asked by the chairman of the fitness-to-practice committee if she now believed that her finding was of cervical cancer, she said: “Yes.”

The doctor was giving evidence in the case of gynaecologist Dr Mukhtar El Siddig Awadalla (53), who faces allegations of poor professional performance.

It is alleged that he failed to arrange for investigative surgery, involving a hysteroscopy to examine the uterus, cervix and fallopian tubes, for Ms Hughes in March 2010.

The procedure was eventually carried out by Dr Awadalla in May 2010.

However, it is also alleged that during the procedure he failed to perform a biopsy, which could have been used to diagnose Ms Hughes’s cervical cancer.

Dr Awadalla worked as a locum consultant obstetrician and gynaecologist at the Midland Regional Hospital between 2007 and 2012, but now lives and works as a consultant in Sudan.

He returned to Ireland for the hearing and has been representing himself.

Ms Hughes, a mother-of-four, began to suffer from bleeding and abdominal pain in 2008, the inquiry had heard.

She was referred to the hospital in Mullingar, but was not diagnosed with cervical cancer until October 2010. She died seven months later.

Giving evidence via videolink, Dr A, a consultant obstetrician and gynaecologist at the hospital, said he saw Ms Hughes when she was first referred to the hospital in 2008.

He said part of the problem with her care was that she had nine attendances through the hospital’s accident and emergency unit, which was “not the best way to access services”.

Ms Hughes ended up with different consultants, depending on the day of the week she was admitted, he said.

“It is not a very common pathway that a patient would take, to go from one consultant to another like that; that in itself leaves it likely to lead to some confusion,” Dr A said.

Asked whether a patient would be aware if he or she had been transferred to a different consultant, Dr A said he assumed a patient would, but he could not be sure in the case of Ms Hughes.

Dr A also told the hearing that he cancelled a hysteroscopy planned for Ms Hughes in December 2009 because she had been admitted to the hospital and was under the care of a different consultant.

He said he would not usually insist on doing the procedure himself, if someone else was going to do it.

“I didn’t know exactly what he was doing, but I knew he was looking after the issue,” Dr A said.