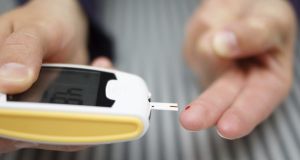 Teenager Aoife McCormack (14) has to have her finger pricked 10 times a day.

Paula McCormack has to wake her teenage daughter at least two times most nights to test her blood sugars levels.

Aoife (14) has had type 1 diabetes since the age of five. “That’s almost 10 years of pricking her finger 10 times a day, and five injections per day just to keep her alive,” said the Co Roscommon woman.

She wants all children with diabetes to have access to a new device which she says would eliminate the need for 90 per cent of painful finger prick tests.

The Freestyle Libre, a new blood-glucose monitoring system using skin sensors which has recently become available here and was demonstrated by a five-year-old girl on the Late Late Toy Show, has the added advantage of helping to flag potentially fatal complications, according to the Elphin woman.

She believes the Libre can reduce hBa1c , a measure of how good the blood sugar control is, by about 1 to 2 per cent, and so help reduce the risk of for example, damage to kidneys or eyesight.

“Given the cost to the State of managing complications of diabetes, I would think investing in technology to improve blood sugar control in young diabetics would be a sound investment,” said Ms McCormack.

Because the Libre is not available on the Longterm Illness Scheme the McCormacks cannot afford it. But Paula McCormack believes it could actually save the HSE money.

The device costs an initial €170 plus €120 for each additional month but Paula McCormack says that every month she goes through six boxes of test strips (to do finger prick tests), which cost the State €300, considerably more than the cost of the new device each month. “You would still need some test strips with Libre, but a lot less of them,” she pointed out.

In a letter to her local TD Eugene Murphy (FF) she pleaded with him to lobby Minister for Health Simon Harris on the issue.. “You would be taking a great step in making many children’s diabetes ordeal easier to bear and you would also be saving money for the HSE in the long term.”

Like all parents of children with diabetes, Paula McCormack has to wake her child a number of times during the night to do regular blood sugar tests.

“It means disturbing her sleep, probably around 2am and again at 4am,” she explained. “With a libre, all you have to do is wave the reader near the sensor. It can even read through a duvet”.

Deputy Murphy said the Libre would be “life changing” for many children.

“It made me sad to see my child watching the Toy Show and to hear her say how much she would love it, as for me paying for it is out of the question”, said Paula.

Aoife did have the Libre for a month – sourced in Northern Ireland – but the family cannot afford it longterm. “She loved it because of the freedom it gave her,” said the mother who stressed that having diabetes has never held her daughter back. She does Irish dancing, boxing, swimming. We try to keep life as normal as possible and Aoife has gone for sleepovers and to teenage discos. She would have liked to go to the Gaeltacht but that is not possible.”

The Minister for Health Simon Harris said the HSE is due to meet the manufacturers of the Freestyle Libre shortly.

In response to a parliamentary question from Deputy Murphy he said the manufacturer had not yet made a completed application to the HSE for reimbursement of the device under the Community Drugs Schemes.

The new device has been described as a “potential game-changer in diabetes management” by Prof Donal O’Shea, consultant endocrinologist at St Vincent’s University Hospital, Dublin.