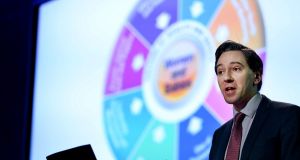 A new set of standards for the State’s maternity services were developed in direct response to a number of high-profile childbirth controversies in Irish hospitals, a conference has been told.

Speaking to a meeting of healthcare professionals in Dublin Castle on Wednesday, Health Information and Quality Authority (Hiqa) chairman Brian McHenry made particular reference to the watchdog’s negative findings in relation to maternity care hospitals in Galway and Portlaoise over recent years.

“A number of high-profile reviews and investigations conducted by Hiqa, including the 2013 investigation into services at University Hospital Galway and a 2015 Portlaoise investigation report, found serious deficits in the care and support provided to women,” he said.

The new standards, which cover areas such as care and support, workforce and governance within maternity hospitals, were published by Minister for Health Simon Harris on Wednesday and Hiqa will be able to inspect against them in hospital visits immediately.

The investigations in question were instigated following the death of Savita Halappanavar in Galway in 2012 and infant deaths in Portlaoise over a number of years.

“These failings have at times undermined confidence in the Irish maternity services, and have impacted significantly on staff morale,” added the Hiqa chairman, who said he expects the new rigorous standards to be adhered to in future.

The Minister said the standards will have a “major and positive impact”, adding he will be writing to the HSE asking it to implement them at the nearest possible opportunity, although no exact timeline has been put in place as yet.

Mr Harris also encouraged nurses and midwives present at the meeting to tell family and friends about the HSE’s Christmas recruitment drive, which will specifically target Irish healthcare professionals returning home for the holidays.

The organisation’s head office in Dr Steevens’ Hospital will open between 28th and 30th December to hold interviews with and give information to interested applicants.

“On the 28th, 29th and 30th of this month over the Christmas period, the HSE’s head office in Dr Steevens’ Hospital will be open for any midwife who maybe left Ireland to go abroad in a time when there wasn’t a job to call in,” he said.

“I would encourage any midwife, midwife graduate or potential midwife to consider calling in then,” he added.

It marks the continuation of an overseas recruitment strategy by the Irish health services that has had mixed success up to this point.

After first putting a call out to Irish healthcare professionals who have emigrated abroad to fill posts at home in July 2015, the HSE only managed to employ 77 people.

It offered a tax-free relocation package of up to €1,500, funding assistance for postgraduate education as well as to pay the Nursing and Midwifery Board of Ireland registration fee.