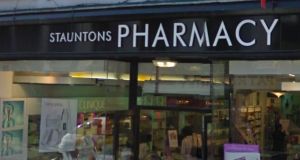 Stauntons Pharmacy in Castlebar, Co Mayo where errors were allegedly made in dosage

A Co Mayo pharmacist has been cleared of charges of professional misconduct and poor professional performance in relation to medicines supplied to a young patient at double the prescribed dosage.

A decision on charges against two other pharmacists working at Stauntons Pharmacy in Castlebar has been deferred to the New Year, the professional conduct committee of the Pharmaceutical Society of Ireland decided on Tuesday.

The committee found pharmacist Patrick Durkin had no case to answer as the evidence heard over three days had not reached the required standard of proof.

It is still considering an application by lawyers for the pharmacy that another pharmacist, Ana Eusebio, be censured for errors made in supplying medicines to three patients.

The committee will announce a decision in this case in January, and will also say whether it accepts a submission by the pharmacy’s legal team that the third pharmacist, Patrick Staunton, give an undertaking not to repeat the conduct referred to in the allegations he faces.

Solicitor Maria Dillon said Mr Staunton had an unblemished professional practice stretching over 35 years. As an employer, he had ensured robust systems were in place for the management of staff.

Mr Staunton and Ms Eusebio face charges of professional misconduct and poor professional performance in relation to prescribing for a number of patients.

It is alleged that Ms Eusebio supplied a customer, described as patient A, with a supply of 50mg Enbrel on one or more occasions in circumstances where prescriptions dated October 2011 and March 2012 provided for the supply of the 25mg form of the medicine.

Enbrel is used to treat arthritis and other conditions.

After identifying that Patient A had been supplied with the incorrect dosage, Ms Eusebio failed to refer the patient for medical review, it is alleged.

Ms Eusebio has admitted these allegations but denies an allegation that she failed to inform the child’s parents of the errors and of any steps taken to ensure the patient’s health and wellbeing. She also admits further charges of supplying medicines to two other patients otherwise than in accordance with a valid prescription.

Mr Staunton is accused of failing to refer Patient A for medical review and to ensure there were adequate controls in the pharmacy for the safe supply of high-tech medicines over an 18-month period between 2011 and 2013.

Mr Durkin was originally accused of permitting the supply of Enbrel at twice the prescribed dose in March 2012 and of failing to contemporaneously mark this prescription in breach of regulations.

Ms Dillon said Mr Durkin had no clear recollection of the events which were the subject of the allegations and argued that, even if the facts were accepted as proven, they did not amount to poor professional performance. She said Ms Eusebio, while admitting to a “human error” that resulted in the incorrect supply of medicines, has been “profoundly apologetic” to the family of Patient A and to her employers for all that had occurred.

Everyone in Ireland to get Covid-19 vaccine by September, Minister for Health says 13:38
Woman in hospital after being attacked with knife in Dublin 13:02
Holohan warns of up to 1,000 Covid-19 deaths in January, calls for tighter air travel rules 13:02
Restaurants and bars could stay closed until the end of May, says Taoiseach 13:00
Covid-19 patients in hospital remain at high levels as lockdown extension expected 12:13