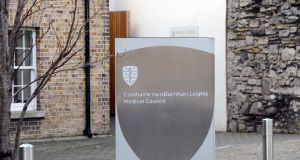 Dr Mukhtar El Siddig Awadalla failed to properly carry out a procedure in 2010 that could have detected that an 80-year-old patient had cervical cancer. Photograph: Alan Betson

A doctor who failed to diagnose cervical cancer in an 80-year-old patient has been found guilty of poor professional performance by a Medical Council committee.

Dr Mukhtar El Siddig Awadalla (53) failed to properly carry out a procedure in May 2010 that could have detected that Mary Hughes had the disease, a fitness-to-practise inquiry found. He was working as a locum consultant obstetrician and gynaecologist at the Midland Regional Hospital, Mullingar, Co Westmeath, at the time.

The inquiry heard Mrs Hughes, a mother of four from Longford, suffered from a number of medical conditions which she managed successfully. She had a good quality of life until 2008, when she began to suffer from bleeding and abdominal pain, and her health deteriorated significantly.

She was in severe pain before receiving a diagnosis two years after her initial symptoms began and died from the disease on May 20th, 2011, seven months after being diagnosed.

In March 2010, Mrs Hughes met Dr Awadalla and the committee was told he at that point failed to arrange for a hysteroscopy, a means of examining the uterus, cervix and Fallopian tubes.

The inquiry found Dr Awadalla had failed to arrange the procedure but that there were “clearly deficiencies in the procedure for making such arrangements” which led the committee not to regard this failing as serious.

Mrs Hughes eventually underwent a hysteroscopy May 14th, 2010. It was alleged that during this procedure, Dr Awadalla failed to pay attention to the patient’s endocervical canal, where a tumour may have been located. After the procedure, he reported the findings as normal.

Dr Awadalla, who now lives and works as a consultant in Sudan, represented himself during the inquiry. He contended that any tumour may have been too small to detect at that time, but this was rejected by the committee.

The committee said this constituted poor professional performance as an ultrasound and bleeding indicated a tumour was present and a diagnosis was possible.

It also found Dr Awadalla guilty of failing to take a biopsy during the procedure, which could have led to an earlier diagnosis of the cancer. It rejected his defence that there was not enough tissue present to take a biopsy.

The committee also found that the doctor had failed to keep adequate notes in relation to Mrs Hughes but ruled that this breach was not serious enough to count as poor professional performance.

The committee will now make a recommendation to the Medical Council on the appropriate sanction for Dr Awadalla.

Kevin Hughes, Mrs Hughes’ son, told the inquiry his mother lived an active life until 2008. He said that in November 2010, after the initial diagnosis of cervical cancer in Mullingar, he and his siblings drove his mother to St James’s Hospital in Dublin, where it was confirmed.

“We were told her condition was advanced,” said Mr Hughes.

The doctor recommended palliative care in the form of radiotherapy, and the family concurred. Mrs Hughes died on May 20th, 2011.

Mr Hughes, who made the complaint about Dr Awadalla, said his mother was a very private person. “For her, to be bleeding was embarrassing. She didn’t want male involvement. She didn’t want to trouble me.”