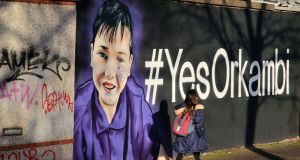 Orkambi graffiti on Charlemont Place at the side of the Grand Canal in Dublin. Photograph: Nick Bradshaw/The Irish Times

Negotiations over a potentially life-saving drug for cystic fibrosis patients are ongoing according to the Minister for Health, who expects an update on the situation in the new year.

The State has been at loggerheads with Vertex, the maker of drug Orkambi, over the price of the treatment which may be beneficial for hundreds of Irish patients according to the Department of Health’s own estimates.

The drug failed a cost-benefit analysis test by the National Centre for Pharmacoeconomics, which advises the State on such purchases, in June as the price of €160,000 per patient offered by Vertex was deemed to be prohibitively expensive.

The decision was met with dismay by people living with cystic fibrosis and their families, who have in recent months organised a concerted campaign calling for Orkambi to be publicly funded.

Speaking at an event on Wednesday, Minister for Health Simon Harris said he has had conversations with his Australian counterpart earlier this week about that country’s efforts to negotiate a deal for the drug.

“They [AUSTRALIA]haven’t been able to negotiate successfully with a company that, in my view, really has tried to extort Irish taxpayers in relation to this.”

Further talks between his department and the drug manufacturer have already taken place this week, and the minister confirmed that an update is expected early in 2017 but did not give any indication of what it might contain.

He also called for meaningful engagement from the company in discussions, and asked commentators from all backgrounds to reserve judgement on the issue until a potential deal can be concluded.

“I would suggest that it would be prudent for everybody to provide space for that engagement,” he said.

“I made it very clear when Vertex decided that their final offer wasn’t their final offer and were willing to reengage further, that that engagement had to be meaningful. It can’t just be about sitting in a room and saying ‘we’re engaging’.”