Excess sitting has been linked to depression among adolescents. So what can be done? 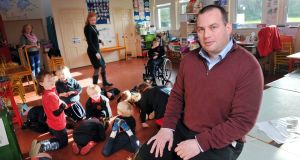 Sit still – it’s the mantra of most classrooms, but not at primary principal Eoin Fitzpatrick’s school in Cork.

In between lessons the pupils close their books, spread out across the classroom and a dance video pops up on the interactive whiteboard.

It’s GoNoodle time – a programme that promotes physical activity in the classroom.

“We try to do movement breaks every hour or so or between lessons,” says Fitzpatrick, principal of Bunscoil Chríost Rí.

“The children copy what they see on screen, whether it’s dance moves or exercises . . . It’s great fun – they need to keep active.”

These kinds of exercises are needed now more than ever, he says.

Until recently, the school had a “no running” policy in the playground, for insurance reasons.

Changing lifestyles have also led to a deterioration in children’s overall fitness and movement skills.

While schools used to take for granted that children could jump, throw or catch sports balls properly, it’s no longer the case.

“There are some, of course, who are into lots of sports, but there’s a significant cohort who find these activities a challenge. Devices like smartphones are playing a major role . . . There is a lot less informal play out in estates and parks. Before, kids were jumping over fences and hedges. Now you have to teach those skills specifically to kids.”

His observations are backed up by a recent Dublin City University study which found one in four primary school children cannot run properly and lack “fundamental movement skills”. In addition, one in two children cannot kick a ball properly, and less than one in every five can throw a ball.

It found teenage students who spend too much time sitting still are much more likely to have depressive symptoms – such as low mood, loss of pleasure and poor concentration.

His recent examinations of the health status of inactive 15 year olds found some of their cardiovascular health was comparable to that of 55-60 year olds.

“Parents don’t see the clinical manifestations of this, but the ultrasound imaging shows it up very clearly,” he says.

“These are the arteries supplying the heart and the brain. It’s the build-up of this fibro-fatty plaque that can cause heart attacks or stroke. This should be a wake-up call for parents.”

Too much screen time, he says, is a key culprit by taking unstructured physical activity out of children’s lives. However, the problem is a bigger issue than this.

“We’ve engineered activity out of our lives,” he says. “We don’t have an environmental infrastructure that allows young people to walk safely to school anymore . . . We’re not genetically programmed to sit still for so long.”

He points to recent research involving the Amish community in the US; it found men walked an average of 18,000 steps a day, and women 14,000. The average is Ireland is closer to 5,000 steps.

In addition, latest research shows just 12 per cent of teenagers in secondary schools are meeting Department of Health recommendations of at least 60 minutes daily of “moderate to vigorous physical activity”.

Teenagers are also getting less active the older they get.

Pat Tuohy, a PE teacher at Summerhill College in Sligo, says competitive sport and formal exercise can be a turn-off for many teens,

It’s one reason why teachers at his school have set up sporty clubs such as kayaking and surfing. They are, he says, reaching out to pupils who might not otherwise be engaged. But schools, he says, can only do so much. Parents, he says, also have to set a good example.

“A child is in school for a third of the year, so what about the other two-thirds? Much of the responsibility lies with the parent.

“This is a generation that has grown up with technology. Their parents have handed it to them, but they haven’t handed their time,” he says,

Áine Lynch of the National Parents’ Council – Primary feels it is not entirely fair to lay the blame at the door of parents.

She says there are more demands than ever on mothers and fathers, who are feel under pressure to ensure their children’s academic, extracurricular and mental health needs are met.

“It is difficult. Parents, of course, aren’t a homogenous group. But the way we live now means we have to timetable things, drive them here and there in the car,” she says.

“It’s easy to say it’s cotton-wool parenting and let them walk . . . but you wouldn’t want your child walking on busy roads or cycling on a bicycle lane that’s also a bus lane.”

She says parents need to be supported in encouraging healthy lifestyles, and public policies also need to support this.

Prof Moyna agrees educating parents is crucial. Too often, he says, we are blind to the needs of our own children,

Research, for example, shows the vast majority of parents underestimate their overweight child.

It is vital parents ensure kids eat the right amount of fruits and vegetables and fewer calorie-rich snacks. They also need to be tuned in to opportunities for physical activity and set hard-and-fast rules about time spent on screens or TV.

Schools, too, need to factor exercise into part of the school day and counter the over-emphasis on academic success at all costs. The cost of not acting, he says, is too big to contemplate.

“Take Type-2 diabetes, which is mostly a lifestyle disease. We spend close to €1.5 to €2 billion a year on a disease which we shouldn’t be spending in the first place,” says Prof Moyna.

“Imagine if we put that into better PE facilities or equipment with smart sensors to track people’s health and make health science more exciting?”

“In other words, adolescents don’t necessarily need to win medals at school sports days or be on the school’s number one rugby team. They just need to sit down less.”

He said something as simple as walking to school or playing a musical instrument has measurable, lasting benefits for mental health – as well as benefits for physical wellbeing and personal accomplishment.

“The best advice for parents is to lead by example. We are all creatures of habit, so we should integrate more light physical activity into everyday routines, for us and for our children.”