Emigration of medical staff blamed on wide range of problems

Failure to transfer tasks to junior staff, bullying and burnout among issues highlighted 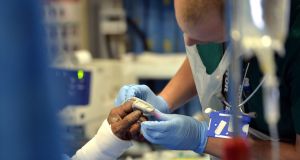 Trainees said the failure to progress the transfer of tasks to other health staff had a particularly negative impact on interns, and in certain specialities. Photograph: Alan Betson

A failure to transfer tasks such as taking blood, administering drips and performing ECGs from doctors to more junior staff is driving high medical emigration, according to a new report.

Bullying and harassment, low morale and burnout, and negative media coverage are also raised by trainee doctors as issues of concern, according to the Department of Health report.

“Doctors were afraid to complain [about bullying and harassment], due to the likely negative impact on their careers of doing so,” according to trainee doctors whose views were canvassed for the report.

Their concerns are contained in the latest report into progress made in implementing the recommendations of a 2014 working group on medical training and career structure, chaired by DCU president Prof Brian MacCraith.

The trainee doctors said they were concerned, among many issues, about the need for pay parity for consultants, and out-of-pocket expenditure they face of €2,000-€4,000 a year.

They also expressed concern about the provision of “rest rooms” in the new national children’s hospital, needed for “fatigue management”, as well as a lack of access to computers for junior doctors. A lack of payment for overtime work, and of funding for training, were also mentioned.

“Negative comments in the media regarding issues re obstetrics and gynaecology, and the absence of support for staff from corporate HSE” was also raised as an issue of concern.

Trainees said the failure to progress the transfer of tasks to other health staff had a particularly negative impact on interns, and in certain specialities. “This and similar failures have led to a significant number of doctors emigrating.”

The report says additional staff would be needed to perform tasks such as IV cannulation, phlebotomy, ECGs, which are often carried out by junior doctors. A working group has proposed this work be carried out by healthcare assistants working in hospitals from 8am to 8pm at weekends, and from 8pm to 8am during the week.

“It is recognised this would be a significant policy decision and would require additional resources.”

It is also proposed to take in up to 200 doctors a year from developing countries for two-year training periods. This, the report argues, would reduce Ireland’s dependence on junior doctors who are not on training schemes to become consultants.

However, the proposal requires adequate resourcing and significant policy decisions before progress can be made, it adds.

1 ‘Everyone still thinks it’s a joke’ - parents of toddler with coronavirus speak out
2 Miriam Lord: You cannot cocoon democracy – or can you?
3 Ireland has strategy to ‘break the chains’ of coronavirus - WHO’s Mike Ryan
4 UK makes another coronavirus U-turn but doubts over strategy linger
5 Varadkar: Decision next week on relaxing coronavirus restrictions
Real news has value SUBSCRIBE