Cancer patient has ‘no choice’ but to spend €40,000 on treatment 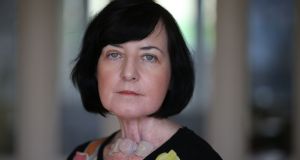 A cancer patient has been forced to pay almost €40,000 from family savings to fund a potentially life-saving treatment that is available free to women with cervical cancer.

Mother of three Maria Waters, who is coping with her third bout of the disease and has advanced head and neck cancer, is due to begin her first round of treatment with the immunotherapy drug pembrolizumab on Monday.

But Ms Waters has to pay for the private treatment – at a cost of €9,000 for each of four rounds – because neither the HSE nor her insurer, Irish Life Health, will fund the therapy.

“Pembro” is the drug that has helped extend cervical cancer advocate Vicky Phelan’s life; initially she funded it herself, until the State agreed to pay. Minister for Health Simon Harris then agreed to provide it to women affected by the CervicalCheck controversy and, after coming under political pressure, to all women with cervical cancer whose doctors recommended the treatment.

This was despite it not being licensed for this form of the disease anywhere in Europe, and despite evidence that it has limited effectiveness in treating cervical cancer. The drug has been approved for melanoma and a small number of other cancers, but not the head and neck cancer Ms Waters has.

Her consultants say she needs “first-line” use of the drug, meaning it would be administered experimentally along with chemotherapy, rather than after it.

“The doctors have explained that the second line treatment – where pembro is given after chemo has been tried – is not enough for me. This is my third cancer; it has metastasised. They advised me that if I wait, the disease will have progressed too far.”

An assessment of whether pembro should be reimbursed generally for head and neck cancer is under way, but the drug approval process is unlikely to be completed for some time.

Ms Waters, from Killiney, Co Dublin, is left wondering why she is being treated differently from women with cervical cancer.

“I have not asked anyone to help me pay for this treatment, we are going to try and manage it ourselves, but it’s wrong. I cannot sleep at night with the worry and unfairness of all of this. I’m only 51 now. I have the rest of my life to live.”

Ms Waters developed oesophageal cancer in 2004, but went into remission after radiotherapy and chemo. Her cancer came back in 2018 and she needed surgery to remove her oesophagus and her larynx, as a result of which she needs to speak through an electronic voice-box.

After becoming ill last November, she underwent a course of radiotherapy, and is due to start treatment with pembro privately on Monday.

Irish Life, while declining to comment on individual cases, said it covered the cost of high-cost drugs in accordance with the criteria set by the National Cancer Control Programme and the National Council for Pharmacoeconomics. “If a request for a drug has been declined, it would be because the patient did not satisfy the clinical criteria for coverage.”

Ms Waters says she has no choice but to pay for the treatment. “I cannot just sit back and say, ‘Well, there was another option but I couldn’t go for that’. Robert [her husband] and I work hard; we have saved up, in order to help our three children in the future. But I feel that this has ruined our dreams for their future.”

She is appealing the decision by Irish Life to refuse funding.