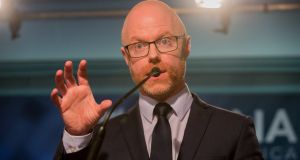 The Government has rejected a last-minute plea by the HSE board for up to €20 million in special funds for newly available drugs and medicines this year.

The Department of Health told the HSE board that no additional money was available and the costs involved would have to be met from savings.

The HSE said on Thursday that applications for new drugs that would mean extra costs were being considered in the context of savings from initiatives such as switching from branded products to generic and biosimilar medicines.

It said new drugs that were budget-neutral or would lead to net savings were being routinely approved.

HSE chief executive Paul Reid wrote to the Department of Health on December 10th to say his board and its chairman, Ciarán Devane, were concerned about the lack of funding for new drugs.

This letter was sent more than a month after the HSE had submitted its service plan for 2020 to the Government but at a time when there were some discussions about additional funding potentially becoming available.

“We estimate the potential cost of this to be in the region of €15-€20 million. I should be grateful if you would bring this issue to the Minister’s attention for appropriate consideration on part of the current process.”

On December 12th, the department’s secretary general, Jim Breslin, said he had told the Minister, Simon Harris, about the views of the HSE board, but there would be no additional money provided.

“Notwithstanding the already targeted savings of €50 million from switching to biosimilar medicines, the department believes . . . that there is ongoing requirement for the executive to continue to pursue efficiencies, including in the supply, cost and usage of existing medicines, which could free up resources to fund new medicines.”

He said the Minister had already urged the HSE to look at working with health professionals to secure better value in relation to prescribing.

Fianna Fáil health spokesman Stephen Donnelly said it was “astonishing” the Minister would approve a service plan with no funding allocated for new drugs. “It is also extraordinary that a request from the board should be so blatantly ignored,” he said.

Covid-19 messaging may be too focused on healthy people over 70, watchdog warns