McDonald’s should do more to fight Irish obesity, says expert 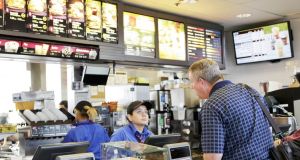 A customer at a McDonald’s counter. Phortograph: Getty Images

McDonalds is making calories “almost invisible” on their menu boards and needs to do more to help tackle an obesity crisis in Ireland, one of the country’s leading obesity experts has said.

Donal O’Shea, the Health Service Executive’s clinical lead for obesity, said the fast food chain was taking a lead in the industry by introducing lower-calorie meals but added that it was “disguising” the calorie content of most of its range.

“I think McDonalds lead these kind of initiatives, in fairness to them, but they do disguise what the fast food industry is about, which is selling their main products 90 per cent of the time and really disguising the calorie content as best they can, even though they will flagship initiatives like this,” he said.

Last month, McDonalds launched a lower calorie “Meals Under” range, saying it strongly believed in “providing our customers with transparent nutritional information in order to help them understand what they are consuming and make informed choices”.

But Prof O’Shea said : “If you go into McDonalds and try find out how many calories are in your Big Mac or Grand Big Mac, even though they say they put them beside the price, look at the colour – they make them almost invisible.

“We know that making people aware of calories is important. We know putting them beside the price in the same size as the price and the same font and as remarkable a colour is important.”

Prof O’Shea said customers adding options like a sugar sweetened drink or smoothie to their meal can also bulk up the calorie content very quickly.

This can mean a children’s meal – “which is often a snack for a child” – of up to 700 or 800 kilo calories, he told Newstalk’s Breakfast show.

“That is way beyond what it should be. We need more and more awareness of that in the middle of the obesity crisis we are in,” he said.

Prof O’Shea said McDonalds is “in the lead in raising calorie awareness but it still isn’t where it needs to be” while the likes of “Burger King and places that refuse to post calories” also need to act.

“You are going to struggle with your weight if you are having fast food two to three times a week, which is what lots of people are doing,” he added.