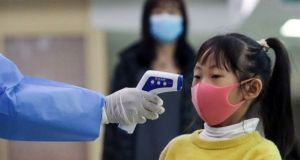 A Kenyan health worker screens a passenger at Jomo Kenyatta International Airport in Nairobi who has arrived from China. Photograph: EPA

The Department of Health is looking at legal changes that would allow for the forcible isolation of people carrying the Covid-19 disease.

Existing provisions that allow for the quarantining of people with other infectious diseases may also be used to ensure coronavirus patients can be isolated, a senior HSE official has indicated.

Under existing laws, public health doctors have significant powers to force the isolation of people with infectious diseases such as TB, smallpox and cholera.

HSE assistant national director Kevin Kelleher said the department was looking at how it could implement these law changes as quickly as possible in order to accommodate the response to the Covid-19 outbreak.

“We might seriously consider doing something and seeing what happens,” he told journalists at briefing, adding that there were provisions in the legislation for doing “certain things” in the case of diseases “of unknown type”.

In recent decades legislation has had to be updated to take account of previous outbreaks of new disease such as Sars and Zika.

Earlier this week police in the UK were given extra powers to force people in danger of spreading the virus into isolation. The law was pushed through after a patient in voluntary 14-day quarantine tried to leave early.

In general the response of Irish public health authorities is based on encouraging people to self-isolate if they are showing symptoms. Ireland has no confirmed cases of the disease, which has spread from China to 24 other countries.

Asked what the authorities would do with a person who refused to self-isolate, Dr Kelleher said “we’d make every effort to persuade them” to self-isolate. However, he went on to indicate that tougher legal measures could be resorted to if necessary.

“Most reasonably people would accept they are best off in hospital with a disease like this,” said Dr Cillian de Gascun, head of the department’s expert advisory group.

The National Virus Reference Laboratory in UCD had tested 65 people up to last Monday for the virus, but all tests have been negative. The rates at which suspected cases have arisen in recent weeks has varied, according to Dr de Gascun, who is also director of the lab.

Dr Kelleher declined to say whether all of these cases involved people who had travelled back from mainland China.

Speaking in Brussels after a meeting of EU health ministers, Minister for Health Simon Harris said he was satisfied Ireland had a “significant level of preparedness” for the virus. The epicentre of the outbreak was still very much in China, with 99 per cent of reported cases, he pointed out.

Irish public health experts have said they do expect to see a case of Covid-19 in Ireland, given its limited transmission to so many other countries, including many in Europe.

Flu continues to circulate in the community, though levels are falling, the briefing also heard. So far this winter 85 people have died from flu and 3,323 cases of this virus have been recorded.

In a statement last night, the HSE said its public health policy and approach in relation to the virus had not changed and remained in line with recommendations from the World Health Organisation and the European Centre for Disease Prevention and Control.

“As part of enhancing our preparedness and response to Covid-19, the department is seeking to make provision for this disease to be added to the list of notifiable disease so that doctors can routinely notify the HSE when a case is diagnosed,” it said.

“It also intends to add Covid-19 to the list of infectious diseases such as smallpox, which allows a doctor to detain a probable case of infection in the highly unlikely event that a person refuses to comply with infection prevention and control protocols.”

The HSE said this was also done for the Sars epidemic in 2002.

“It is not envisaged that such powers would in fact be used,” the statement said.