Guide to investigations into CervicalCheck controversy 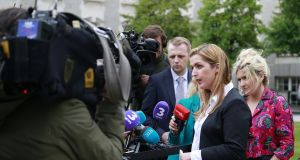 Public health specialist Dr Gabriel Scally was appointed in May to chair an independent scoping inquiry to establish the facts in the CervicalCheck controversy when the screening service failed to tell women with cancer what clinical audits of their smear tests had found.

The inquiry is examining the outsourcing of services to laboratories in the United States. It is also establishing the background to CervicalCheck’s failure to tell women about the audits and is looking at what the Department of Health, the Health Service Executive and its then chief executive Tony O’Brien knew.

One of the issues the inquiry is focusing on is the disclosure of information to the patients, what decisions were made and how they were implemented.

He interviewed Vicky Phelan, whose High Court case revealed the controversy and a number of other women affected.

Dr Scally, who is expected to report at the end of August or early September, had expressed frustration at the difficulty in getting co-operation from the HSE and access to documentation.

The Scally inquiry is intended to be the basis for setting up a commission of inquiry.

When the controversy first emerged, a clinical independent review was offered to the 221 women diagnosed with cervical cancer who learned only after the High Court case brought by Vicky Phelan that they should have received an earlier intervention.

A team of expert international cytopathologists from the UK Royal College of Obstetricians and Gynaecologists was appointed to undertake a clinical review of the smears of all women in Ireland who were diagnosed with cancer in the past 10 years.

There are an estimated 3,000 women in this category, about 1,800 of whom have a screening history and went to CervicalCheck.

Minister for Health Simon Harris said that of the 1,800, about 1,400 women’s cases had already been audited by CervicalCheck.

The UK experts advised that all women should be individually asked for their consent to have their cases reviewed – for each woman to have her own screening history independently, externally reviewed and to receive a report of that review.

It was first reported that the review would be concluded by the end of May but the HSE insisted it had always said would take between four to six months.

The preliminary work to establish the commission is near completion and letters are expected to start being sent next week.

High Court judge Charles Meenan has been asked to examine compensation options, including a redress scheme, that avoid a court process, for women affected by the CervicalCheck controversy.

Mr Justice Meenan will consider alternatives in the wake of the latest development in the controversy over the breakdown of mediation and women being forced to go to court and face an adversarial situation to resolve their cases after reports of “legal aggression” by the laboratories involved.

The Government had planned to seek settlements by mediation and pursue the labs for damages to ensure the women did not have to go to trial.

Mr Justice Meenan has been asked to “assess the management of cases, liability and quantum that arise, in conjunction with the State Claims Agency and other relevant bodies (State parties, laboratories, insurers, indemnifiers and affected parties)”, a Government statement said.

His report is to recommend a way through which cases can be resolved “in a sensitive and timely manner, that is appropriate to these cases involving complex liability issues and multiple parties, outside of adversarial court processes”.

The judge will seek the views of women with cervical cancer and their families and report back within two months.

Mr Harris said: “We have to afford women an opportunity to establish negligence [rather than just the limitations of the screening programmes] in a non-adversarial way that doesn’t involve a witness box in court and having to talk about your own personal health in a very public forum.”