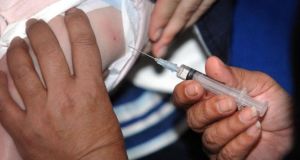 People at increased risk of getting measles are those who are not fully vaccinated with two doses of MMR vaccine or have not had measles in the past. Photograph: David Jones/PA Wire

Four new cases of measles have been identified by health authorities following an alert last month over two incidents.

The recent cases were detected in Dublin, affecting two adults and two children.

They are believed to have likely developed the condition following contact with one of the two earlier cases at hospitals in Dublin.

Their emergence has prompted the Health Service Executive (HSE) to issue a public alert warning against the infection and guidance on how to avoid it.

Measles is a highly contagious disease that is spread easily. The time between exposure and developing a rash is usually 14 days, although over a range of seven to 21 days.

However, people are infectious from four days, before a rash begins to appear, and until four days afterwards.

The HSE requests people to continue to be vigilant. “Measles can be a serious illness and is highly infectious. The best protection is to be fully vaccinated with two doses of MMR (Measles, Mumps, and Rubella) vaccine,” said Dr Helena Murray, specialist in public health medicine.

Symptoms include a high fever, coughing, a runny nose and red eyes. The red rash associated with the condition begins on the head and spreads down the body. This normally starts a few days after the onset of illness.

Those who suspect they may have contracted the disease are advised to stay home, contact their GP and not allow visitors. Pregnant women who have been exposed to measles should seek medical advice as soon as possible.

Installation of new Presbyterian Moderator to be attended by just four due to Covid-19 17:10
Two gardaí posted to Americas to tackle international crime and terrorists 16:46
Army officers evacuated from Goma after weeks of delay 16:43
Robberies from homes down 60% due to pandemic 15:57
Changes to Covid-19 payments to be considered next week, Minister says 15:29