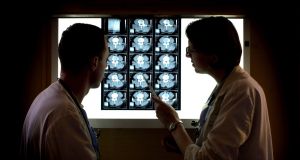 Doctors examine an X-ray in the orthopaedic unit of the Mater hospital in Dublin. Older consumers are likely to have a greater requirement for full orthopaedic cover, the HIA report says. Photographic: Bryan O’Brien

People over the age of 60 are paying substantially more for private health insurance despite the fact that the rules dictate that once a person has a policy they cannot be penalised by insurers either for their age or for pre-existing medical conditions.

The annual report published by the Health Insurance Authority (HIA) also indicates that the number of people prepared to switch insurer in order to save money has “plateaued” despite the substantial savings that can be made by shopping around.

The report shows the over-60s pay an average of 33 per cent more for their premiums than a younger cohort because of careful “market segmentation” by insurers.

It says the combined effect of targeted product features and the difference in premiums for different products means those over the age of 60 pay, on average, substantially more for premiums for the most popular levels of cover.

“Older consumers are likely to have a greater requirement for full orthopaedic cover, which was only available with more expensive policies in two of the three open-enrolment insurers at end 2017,” the report says. “On average, older consumers desire a better level of hospital coverage compared to younger consumers and maybe reluctant to switch plans and/or insurers.”

It also shows a huge reluctance among consumers to switch policies and companies despite substantial savings that can be made.

The HIA also said the “dynamic behind the propensity to switch is changing”. Among those who have switched, cost considerations are not being cited to the same degree. All told, 54 per cent of switchers mentioned price as a factor in 2017, a significant drop from 65 per cent in 2015. In tandem with this, benefits cover and service considerations are becoming more important.

The number of people with private health insurance has continued to climb with 2.17 million people – 45 per cent of the population – covered at end of 2017, an increase of 22,000 in 12 months.

The number of people with policies is not the only thing climbing: prices have also gone up, with the average policy costing almost 4 per cent more at the end last year compared with 2016, according to the report.

The average amount paid for a health insurance premium offering in-patient cover was €1,220, compared with €1,177 in 2016, an increase of 3.7 per cent. The figures are based on gross premium levels but child premiums and young adult discounts have a lowering effect on the average, the HIA said.

The report shows that the VHI remains the market leader with 50 per cent of the policies. while Laya Healthcare has 26 per cent market share and Irish Life Health was on 20 per cent.

The number of products available fell from 373 to 328, which can be largely attributed to the acquisition of GloHealth by Irish Life Health in February 2017.

“The private health insurance market has continued its consistent growth, with the market experiencing its third straight year of increase in in the number of people insured,” said the HIA chief executive Don Gallagher.

He said the private health insurance market was “dynamic . . . with insurers competing and introducing new products at a range of price levels and cover options”. He added: “Therefore, it is important to reiterate there is value in the consumer actively checking their cover and to be prepared to switch insurers to get cover at the right price.”