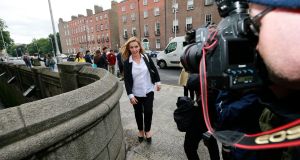 Vicky Phelan at Government Buildings on Wednesday: Taoiseach Leo Varadkar and Minister for Health Simon Harris have been criticised for dragging their feet. Photograph: Nick Bradshaw

The Department of Health has said there is no basis for a claim most of the 221 women affected by the CervicalCheck controversy were the victims of negligence.

The claim was made by a solicitor for some of the women, Cian O’Carroll, who also acted for Vicky Phelan, earlier this week.

In response to questions from The Irish Times, the department issued a lengthy statement saying that a “determination of negligence is one which can only appropriately be made by a court, and the department is not in a position to comment beyond acknowledging that no such determination has been made at this time”.

The issue has convulsed Government in recent times, and Taoiseach Leo Varadkar and Minister for Health Simon Harris have both said they wish to help and compensate the women affected. However, they have been criticised by some of the women and by Mr O’Carroll for dragging their feet. The Government says it is awaiting expert reports on the cases, and on Wednesday asked High Court judge Mr Justice Charles Meenan to examine ways of deciding compensation for the women without formal legal proceedings. A redress scheme has been mooted as one of the possibilities.

Although, the State is awaiting the expert reviews of the cases concerned, there is an emerging view in government that in many of the 221 cases identified there may be no evidence of negligence, as screening programmes have an acknowledged rate of false results.

The 221 cases were identified as part of a lookback audit of cases where women had clear smear tests but later went on to develop cervical cancer.

“It has been claimed that experts recruited to analyse the 221 cases have processed about 40 and feel all involve a breach of duty of care. This appears to be the basis for alleging that the ‘vast, vast majority’ of the 221 cases involve negligence. It is not clear who the experts are or on what basis they have been engaged, but it is likely that they have been engaged in contemplation of litigation,” the department said.

The department said that no cases have been decided by the courts, but that three cases (including the cases of Vicky Phelan and Emma Mhic Mathúna) have been settled.

Mr O’Carroll had also said on Monday that the 221 women identified by CervicalCheck were specifically selected because “their tests were misread to a significant degree and it had resulted in a delay to their diagnosis and treatment”. He said he could not say negligence was a factor in all the cases but the indications were the vast majority fall into this category. He said experts recruited to analyse the 221 cases have so far processed about 40 of them. “They feel that all of those so far involve a breach of duty of care. So the indications are that the vast majority will be a breach of duty.”

The department also said that “it has also been claimed that the 221 women were ‘specifically selected because their tests were misread to a significant degree and it had resulted in a delay to their diagnosis and treatment’.

“That is factually inaccurate. The 221 cases with discordant results do not represent a discrete category within which a particular level of discordance was identified.”

The department describes the result of the smears as “discordant”, meaning that it could have been read differently. However, privately sources insist that this does not amount to negligence.