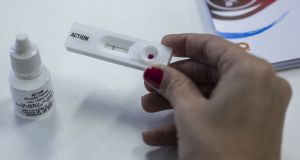 The State’s medicines and health products watchdog has warned people against relying solely on self-administered Human Immunodeficiency Virus (HIV) tests to check if they have the virus.

Such products are becoming more widely available on the Irish market and the incidence of HIV is increasing in the population.

The Health Products Regulatory Authority (HPRA) said anyone considering using a self-test should be aware that, while such tests had a role in assisting people to identify a potential virus, they should not be relied upon in isolation.

HIV antibodies can take up to 90 days to develop in the body in sufficient quantity to be detectable by such self-testing kits. The authority also said no such test was 100 per cent reliable.

An information notice published by the authority on Thursday highlights what it said were some key considerations on sourcing and using these products, as well as providing practical advice on what to consider when purchasing them.

“HIV self-tests (also called point-of-care or near-patient tests) are a type of medical device that can be used by individuals at home,” the authority said.

“The number of people diagnosed with HIV in Ireland reached a record high at 508 cases in 2016 with provisional figures showing a similar rate for 2017. With the rate of new infections significantly higher during the past three years, self-testing for the virus is also growing in prevalence.”

The authority said it recognised that self-tests had a role to play, but said it was important that if a person had concerns about a HIV self-test result or their health they should contact their doctor for advice.

Dr Niall MacAleenan, head of the medical devices department at the HPRA, said no HIV self-test can detect HIV immediately after infection.

“If a person thinks they have been exposed to the virus in the previous 72 hours, they should attend their nearest STI/genitourinary medicine clinic for advice on testing and on post-exposure prophylaxis (PEP) a treatment which can reduce the chances of becoming HIV positive,” Dr MacAleenan said.

“Early, appropriate, treatment of HIV is critical; so if you get a positive result from a self-test for HIV, or if you get a negative result and you are still concerned about a potential exposure to HIV or other STIs you should urgently seek assistance from your GP or a sexual health clinic.”

The authority said it was very important that those considering self-testing were aware of the limitations of these products and that they did not rely solely on the results provided.

Other testing methods available at clinics may provide accurate results before the 90 day mark.

“We would always advise anybody with any concerns about their health to consult with their healthcare professional,” Dr MacAleenan added.

Anyone considering purchasing such a test should check that they display a CE mark along with a four-digit number.

This indicates that the test meets the basic requirements for safety and effectiveness under EU law.

They should also check there was a European address on the packaging and only purchase from a reliable source. In particular, people should be careful when purchasing medical devices on the internet.

HIV self-tests are not appropriate for people already diagnosed with HIV or for people taking PrEP as they are not a reliable way to monitor the effects of treatment and may provide an incorrect result.

Further advice is provided in consumer leaflets available from the HPRA.