The clocks have gone back, but is it for the last time?

Ready for 4am June dawns, 10ams in December and resetting at the Border? 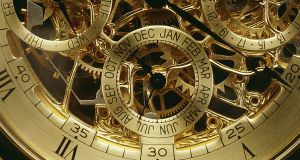 March of time: winter and summer clock changing may soon be a thing of the past.

Did you enjoy that extra hour of sleep as the clocks went back this morning? Savour that moment because this may well be the very last time this particular ritual will ever happen.

If all goes according to a plan laid out by the European Commission, the last-ever mandatory clock change in the European Union will take place in 2019. Member states must notify the commission by April of next year on whether they want to opt for permanent summer or permanent winter time. Whether all 27 states are prepared to go along, however, is not yet clear.

This weekend, the Department of Justice (which has responsibility for everything to do with timekeeping) is announcing plans for its public consultation here on the proposal.

Will the UK, at a moment of heightened political tension, view this as a symbolic opportunity to flaunt its newly acquired independence?

A recent European Commission online public consultation across the EU found 84 per cent of citizens were in favour of ending the changing of clocks in spring and autumn.

The commission trumpeted the fact that it had got 4.6 million responses, the highest number ever received in an exercise of this sort, and that 84 per cent of those backed the change to a single year-round time.

Less loudly advertised was the fact that engagement varied significantly from country to country; three million of those responses came from Germany, representing almost 4 per cent of that country’s population. In contrast, less than 0.25 per cent of Irish people bothered to respond.

The question now is whether individual member states will agree to proceed along the lines advocated by the commission, which has stated a preference for summer time to be applied universally. There is potential for chaos, with a patchwork of time zones emerging across continental Europe.

“We are not proposing that the whole EU either switches to summer or winter time,” said transport commissioner Violeta Bulc at a press conference last month. “All we are proposing is that we do it together.”

But clock-switching on the Dutch-German border is hardly the desired outcome.

An intriguing twist from the Irish perspective is whether the UK, at a moment of heightened political tension, will view this as a symbolic opportunity to flaunt its newly acquired independence.

Brexiteers’ enthusiasm for such a stance may be dimmed when they realise it would mean Britain sharing a time zone with Brussels and Berlin for almost half the year.

But understandably, media coverage here so far has focused on the prospect of travellers from Dundalk to Newry having to adjust their watches – or of people nipping across from Lifford to Strabane in search of an extra hour’s drinking time.

For geographical and historical reasons, Ireland and the UK have been on the same clock since Dublin Time was abolished in the wake of the Rising in 1916.

We moved in lockstep with the UK when it experimented with year-round summer time in the late 1960s, and any recent proposals for change, such as one mooted in a Private Members’ Bill rejected by then minister for justice Alan Shatter in 2013, have been contingent on decisions made at Westminster and, more recently, in Brussels.

So what would the changes mean? If Ireland opts for year-round daylight-saving time, then dawn won’t break in the west of Ireland until almost 10am in mid-December. However, if “winter time” is maintained throughout the year, sunrise in Dublin will occur well before 4am in June, and the stretch in the evenings will be a lot less grand, with sunset happening before 9pm even in midsummer.

Those are the extremes, but where permanent summer time offers real gains is in the “shoulder months” of November, February and March, when the majority of people will have much more daylight at the end of their school or working day without too much negative impact in the mornings.

There has been a broad attempt across the world in recent decades to do away with annual time-shifts, based on data about their negative health effects and on a more general sense that an additional hour of daylight in the evening is more valuable than one in the morning.

Flexible working time, increased leisure opportunities and longer retail opening hours all have an effect on how we spend our day.

The main impediment to change, it seems, is institutional. In the US, legislators in California and other states are also pushing for year-round daylight-saving time, but they need to persuade the federal government before they can proceed. As in the EU, American legislation allows each state to decide its time zone but forbids individual states from choosing when or if to change their seasonal clocks. Whether the gridlocked US political system can respond remains to be seen.

The process so far has been startlingly fast, but the national consultations may be a different matter

Here, the Department of Justice’s public consultation asks three questions. Do you want to stop changing the clocks twice a year? If the clock changes stop, do you want to remain on summer time or winter time? Is staying on the same time as the UK more important than your choice of summertime/wintertime?

“It is very important that as many citizens as possible respond to this consultation and express their views so that the Government may take account of public opinion when considering this proposal by the EU,” says Minister for Justice Charlie Flanagan, clearly implying that the Government will take account of public opinion without being bound by it.

Ultimately the success or failure of the proposal may come to be seen as a test of the EU’s ability to act quickly and decisively on a simple issue which will have an almost immediate effect upon people’s lives. The process so far has been startlingly fast, but the national consultations may be a different matter, depending perhaps on the views of the people who get up early in the morning.