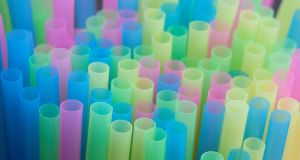 A wide range of plastic items which have existing alternatives, including cutlery, plates, drinks stirrers, balloon sticks and polystyrene fast food containers, will be banned from the EU market to tackle marine pollution. Photograph: Darren Staples/Reuters

The Green Party has welcomed the European Parliament’s approval of a ban on a range of single-use plastics.

Items such as straws and cotton buds are to be banned from the EU from 2021, under draft plans approved on Wednesday by the European Parliament.

A wide range of plastic items which have existing alternatives, including cutlery, plates, drinks stirrers, balloon sticks and polystyrene fast food containers, will be banned from the EU in order to tackle marine pollution.

Members of the European Parliament backed the proposals by 571 to 53 and will now enter into negotiations with the Commission and member states to make it binding legislation.

Green Party leader Eamon Ryan TD welcomed the news, but criticised the Government lack of action on the issue.

“It’s just a pity that Fine Gael are still dragging their heels and blocking the same sensible legislation here at home. We could be leaders on this, instead it looks like we’ll be playing catch-up once again,” he said.

We have a Bill that would put us ahead of the curve on this, but the Government continues to use delay tactics. They need to issue the money message that would allow us to move forward with our Waste Reduction Bill.”

Mairead McGuinness Fine Gael MEP and Vice-President of the European Parliament said: “The new law is aimed at reducing waste from single-use plastic products, which is polluting oceans and clogging landfills. Our oceans are swimming in plastic waste, much of it originating in Europe but shipped outside the EU”.

A member of the Parliament’s environment and public health committee, Ms McGuinness cautioned that plastic products could not be eliminated overnight.

Speaking from Strasbourg, she said, “We need to turn concern into action and already industry is responding to the recycling challenge and work is underway on more sustainable alternatives.

“However, it’s important to note that plastic plays a vital role in our society, particularly for hygiene purposes in healthcare and hospitals. Where there are alternatives available, efforts must be made to encourage consumers and producers to opt for the more sustainable options.”

“There is a responsibility on us as users of plastic to ensure we use it responsibly and there is also a focus on producers to ensure that plastic is easier to reuse and recycle.

“The next step in this process is negotiating a final position with the European Council and I hope to see talks progress in a positive way.”

MEPs also supported a target to cut use of plastic food containers where there are currently no alternatives by 25 per cent by 2025.

There are also measures to ensure 90 per cent of plastic drinks bottles are collected separately and recycled by 2025, and to cut down on cigarette filters containing plastic.

With fishing gear making up more than a quarter of the waste found on Europe’s beaches, the plans will require member states to collect 50 per cent of lost and abandoned gear each year and recycle at least 15 per cent by 2025.There are more than 150 million tonnes of plastic in the oceans, entangling wildlife, polluting beaches and being eaten by creatures such as sea turtles. – Additional reporting from PA