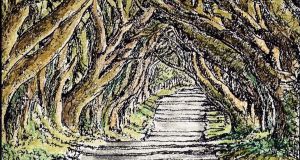 Storm Brendan roared through the old beeches of the Kingsroad, as addicts of Game of Thrones, heedless of punctuation, learned to call the Dark Hedges of Stranocum, Co Antrim. Brendan uprooted yet another casualty of the kind that now threatens that magical avenue.

Four years ago Storm Gertrude toppled two of the 200-year-old trees. Their timber was swiftly transfigured into 10 heavy doors, quite masterfully engraved with dragons, direwolves and the odd kraken sigil. Installed in tourist pubs and restaurants and featured on the glossy Thrones website, this was an impressive initiative. A similar spirit, perhaps, helped carry Northern Ireland through the three-year vacancy game of Stormont’s own thrones.

At the North’s Department for Agriculture, Environment and Rural Affairs, for example, civil servants decided it was time the province had an environment strategy. “Under normal circumstances,” its website confided, “officials would have taken our policy direction from the minister . . .” Without a political boss, it invited “big ideas” from the public for use when the next one came along.

The minister appointed this month from the ranks of the DUP has strong views of his own. Edwin Poots is a Free Presbyterian, creationist and denier of evolution. He concurs with the 17th century Archbishop Ussher of Armagh that the date of creation could be set at 4004 BC.

None of this, it must be said, should predispose Poots against the conservation of biodiversity, composed of all God’s creatures and an indispensable thread of any environment strategy. In 2010, as then minister for the environment, he introduced a permanent ban on hare coursing, readily endorsed by the Assembly.

How Poots feels about badgers is not on record, but his new responsibility for agriculture lands him with the problem of high levels of bovine TB that join Brexit at the head of farmers’ concerns. His department chiefs again took new initiatives on their own. A scientific partnership, announced in 2018, seems bound to lead to some urgent decisions on preemptive badger culling.

After a long decline, the new report shows no let-up in loss of wildlife in the North. Some of its figures are all-Ireland threat estimates. But warnings, for example, on the future of breeding curlews and other waders, speak from a long record of local research. “Most original habitats have gone,” mourns the Ulster Wildlife Trust, “and natural ecosystems are fragmented. One in five of our species face extinction.”

Intensive farming takes up three-quarters of Northern Ireland. Framed often by neat, close-cropped hedges, its cattle, poultry and pig farms generate quite a disproportionate share of UK levels of ammonia, the report shows.

The impact was illustrated dramatically at Moninea Bog in the southwest, a raised bog and Special Area of Conservation. Ammonia from a neighbouring farm severely damaged the bog vegetation, bleaching its mosses and killing algae on trees. Measures to reduce ammonia emissions are expected to benefit biodiversity “within five to 10 years”.

Farming run-off has historically polluted Lough Neagh, the biggest lake in these islands and a special arena for the North’s wildlife. It holds a notable population of pollan, a herring-like freshwater fish left over from the last ice age, and its eels continue to support a precarious traditional industry.

The lake in winter also attracts thousands of migrant European waterbirds. But in 2013, researchers at Quercus, the Centre for Biodiversity and Conservation Science at Queen’s University, reported a dramatic decline in the wintering duck population. It had fallen from 100,000 to less than 21,000, or 75 per cent over a decade.

Some of the decline could be attributed to climate change, as the lakes feeding waterbirds in northeastern Europe stay ice-free in winter. But the Quercus team drew another conclusion: that the North’s farming environment schemes have reduced the organic run-off that boosted populations of water snails and other invertebrates, the food of wintering ducks.

This finds no place in the 2019 State of Nature report, which does note six additional ducks for the region’s threatened red list. Nor does it delve into the long campaign by environmentalists to stop the commercial licensed dredging from Lough Neagh of some 1.5 millions of tonnes of sand a year.

And Northern Ireland still has no national park, 18 years after the Mourne Mountains were selected. Resistance from resident farmers has delayed every effort at decision. In 2010 Poots put it off further. “We need to think carefully, and to debate fully,” he said, “what a Northern Ireland National Park should be like.”

With farmers, environment and rural affairs in his care, he still has everyone to please.