Events focus on how connection to natural world can reduce stress, enhance well-being

The National Botanic Gardens is hosting a series of Saturday guided walks called “biophilia tours” this January to encourage people to embrace their instinctive bonds with nature. 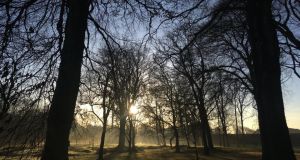 As the group wanders through quieter parts of the National Botanic Gardens, the guide encourages us to take deep breaths and exhale the toxins from our bodies.

January can be a bleak month in the northern hemisphere but connecting with the natural world is one way to lift the spirits while spending time outdoors. The National Botanic Gardens is hosting a series of Saturday guided walks this month to encourage people to embrace their instinctive bonds with nature.

These so-called “biophilia tours” – which are held as part of the First Fortnight mental health, art and culture festival – focus on how connection to the natural world can reduce stress and enhance well-being.

I joined the first tour on Saturday, January 4th to hear from Botanic Gardens guide Jean Burtchaell what exactly biophilia is and how humans can feel better by spending time in nature.

“Biophilia simply means the love of life, living systems and the natural world. The biologist EO Wilson popularised the concept when he studied how we’ve evolved to be hard-wired to connect with nature,” explains Burtchaell to the group of about 25 people who have turned up for the walk and talk.

“Wilson studied how our health improves when we are in nature and how it suffers when we aren’t,” adds Burtchaell, quoting the oft-cited statistic that 90 per cent of Europeans spend less than 10 per cent of their time outdoors.

There has been a huge growth in the number of scientific studies in the last decade showing how spending time in nature is good for your physical, emotional and mental health.

And the growth of “forest bathing”, which encourages people to experience nature through their senses of smell, touch, hearing and taste, as well as sight, is a testament to people’s willingness to learn from these studies.

Burtchaell prompts people to feel the texture of the leaves and hunker down to touch the soil. She selects particularly pungent winter flowering shrubs and points out the patterns in the trunks of trees and the vast evergreen canopies overhead as we move off the paths through less manicured parts of the gardens.

“I suggest people walk outdoors wherever they can but it more beneficial to go to wild places. In his book, The Unofficial Countryside, Richard Mabey talks about how even the weeds growing in the cracks of pavement provide food for pollinators and a chance for us to interact with nature,” says Burtchaell.

Some studies even point to a faster healing response and less need for medication for hospital patients whose beds have a window view of nature.

Burtchaell also speaks about scientific studies that now point to the benefit of non-directed attention or soft fascination. “This form of attention happens when you look at trees, clouds or sunsets. It allows the eyes to absorb the textures with a soft central focus and widening out of the peripheral vision. Scientists have found that it helps restore directed attention which is the form of attention for tasks that require sharper focus,” she explains.

She jokes that next time a teacher gives out to students for looking out the window and day-dreaming, they can say that they were simply restoring their directed attention.

Burtchaell also speaks about fractals, a term which applies to the visually complex or seemingly chaotic patterns in nature that in fact follow consistent mathematical rules.

Physicist Richard Taylor even ran experiments that suggest our brains recognise a kind of “kinship to the natural world”. “Your visual system is in some way hardwired to understand fractals, and the stress reduction [of being in nature] is triggered by a physiological resonance when the fractal structure of the eye matches that of the fractal image being viewed,” he said.

The corollary to these discoveries is that humans can be become easily stressed by the non-natural chaotic urban structures such as busy motorway intersections or high-rise concrete buildings in close proximity.

Taylor said that we need natural patterns to look at, and that we are not getting enough of them. Some argue that as we surround ourselves with straight buildings that don’t mimic natural forms, we risk losing our connection to the natural stress-reducer that is visual fluency.

Burtchaell adds: “Taylor also discovered that human stress hormones are reduced by 60 per cent simply by observing the fractal patterns in nature. It’s an effortless thing that we can simply give ourselves time to do.”

So, as the group wanders through quieter parts of the National Botanic Gardens, Burtchaell encourages us to take deep breaths and exhale the toxins from our bodies. We pass grassland, holly trees and ferns and wander through an arboretum containing oaks, acers, beech and ash trees, to the banks of the River Tolka.

We try to walk in silence for a while but there is much still to learn about this novel approach to walking through these gardens rich in species from all over the world.

The tour ends in the magnificent curvilinear glasshouses as Burtchaell draws the group towards the wonderful scent of a wall teeming with jasmine flowers. “Smelling jasmine equates to taking a valium,” she tells the group as we all wander off, satiated by our fill of nature on a mild Saturday afternoon in January.

The Biophilia tours continue on January 11th, 18th and 25th at 2.30pm, starting from the Education Centre at the National Botanic Gardens, Glasnevin, Dublin. Tickets are priced at just €5.

A series of free nature-themed guided walks on Sunday, January 19th at Airfield Estate, Dundrum, Dublin 14 is already booked out but Airfield Estate guide Eoin Boyle says that there are plans to run more throughout the year. 01-2984301 or see airfield.ie