Irish hunter-gatherers may have become ill from undercooked fish 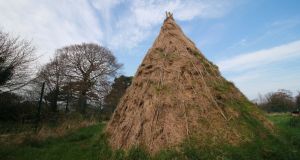 A Mesolithic house constructed at the UCD centre for experimental archaeology and ancient technologies. The latest research has been carried out on samples from a lakeside site in Co Longford. Photograph: Nick Bradshaw

Evidence that Mesolithic hunter-gatherers in Ireland may have harmed their health by under-cooking their fish has been uncovered by researchers examining samples from a 7,500-year-old lakeside site in Co Longford.

Researchers at the Max Planck Institute for Evolutionary Anthropology in Germany, including Waterford man Robert Power, analysed parasites from the ancient site at Derragh, near Lough Kinale. They found new evidence that the humans of the time were likely heavily infected with a parasite from undercooked fish that causes tapeworm.

A science known as archaeoparasitology explores human infections due to contact with animals in an archaeological context. It is increasingly used as a tool in archeological research to investigate relationships between past humans, environments, diets and disease and can be particularly useful where there are no human or animal remains to examine, but where parasite eggs are preserved.

The Derragh site was first excavated 13 years ago and the only human remains found there consisted of a single tooth.

However, all 12 samples recently analysed by the experts in Germany found evidence of the parasite Diphyllobothrium sp., which had never before been detected in European Mesolithic populations.

In living populations, the majority of individuals with diphyllobothriasis, the infection caused by the parasite Diphyllobothrium sp., have no symptoms. But in about one in five infections, individuals experience diarrhoea and abdominal pain, and may also experience symptoms such as headaches, fatigue, constipation and pernicious anaemia.

Due to the rarity of Mesolithic human remains in Ireland, insights into health during this period have been limited.

The positive results from Derragh are the earliest reported parasites and “the first unambiguously human-associated prehistoric parasites from Ireland”, the research published last week in the Journal of Archaeological Science said.

“Our research at the Mesolithic site of Derragh has made unprecedented insights into early Irish diet and health by identifying Ireland’s earliest case of fish tape worm infection,” Dr Power added.

“Before this work it was not known that the parasite fish tapeworm even was present in Mesolithic Ireland which only recently had emerged from the icy grips of the last glaciation.”

Dr Power, an archaeological scientist, said the research he conducted with six other scientists, was only possible as the site was excavated by the Irish Research Institute Discovery Programme between 2003 and 2005.

“I knew about the site and I wanted to look at it further because I heard about some of the finds recovered from the site and the exceptional preservation of organic material.”

“There is no archaeoparasitology lab in Ireland but fortunately a colleague, Angela Perri, had recently set one up in the Max Planck Institute for Evolutionary Anthropology where I was doing my PhD. So it was my idea to have Derragh checked for archaeoparasites.”

A small quantity of fish remains were discovered during the excavations at Derragh. The researchers noted all of this material was burnt, most of it to high-temperature calcinations. A majority of the remains were from eel.

The full article in the Journal of Archaeological Science is available here.