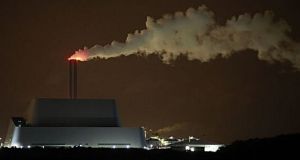 While the Poolbeg incinerator burns up 600,000 tonnes of waste a year, it does not completely eliminate it. Almost 20 per cent of waste, or 115,000 tonnes, remains in the form of “bottom ash”.

Covanta exports bottom ash in 4,000 tonne shipments from the South Docks to the Netherlands, where facilities exist with the capacity to recycle the ash under a scheme known as “Green Deal”. In this proccess any metals are removed for reuse, leaving residual ash.

While in Ireland this residual ash would go to landfill, in the Netherlands it is also processed for reuse, transformed into construction products – mainly used in road building – and can replace up to 50 per cent of materials such as sand and gravel in concrete.

While retaining this material in Ireland would be preferable from a resource point of view, says Covanta , no company does it as the ash does not have “end of waste” status. This is an Environmental Protection Agency (EPA) designation needed if it is to be viewed as a usable product, rather than something that needs to be disposed of.

Agency inspector Pat Byrne said no one has yet made the case to the EPA seeking the designation.

“If someone puts the case forward with supporting evidence that it is equivalent to a material used in say the manufacture of concrete – that it meets the same standards, we would assess that.”

The process is, however, lengthy he says. “We have to assess the risks. What contaminants might still be in waste etc, then have to notify it back to Europe, which is all done under relatively new legislation. So we really don’t know how long it would take, but we are open to it.”