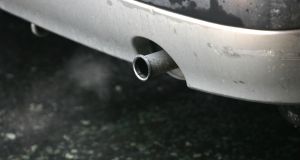 Emissions from cars have improved greatly since 2005, but more people are now driving to work, according to the CSO. Photograph: Frank Miller/The Irish Times

Ireland has been placed among the worst European performers in a range of environmental areas, according to detailed new statistical analysis.

A biennial report published by the Central Statistics Office (CSO) shows a relatively poor performance in a number of areas including emissions, greenhouse gases, bathing water standards and the amount of land designated as protected areas for birds.

The Environmental Indicators Ireland 2018 report updates 79 “indicators” used to reach a broad understanding of the country’s green credentials, covering everything from how we pollute our rivers to the amount of waste we produce as consumers. It is based on the latest data available from recent years.

Not long after the Climate Change Advisory Council warned the country was way off track to reach its carbon reduction targets, the CSO figures show that in 2015 the country had the third highest greenhouse emissions rates per capita within the EU.

In terms of sectors that produce the gas, agriculture was the worst offender, accounting for 32 per cent of the total in 2016, followed by transport and energy at 20 per cent.

The figures show that at that time, the country had the fourth largest cattle herd in Europe.

In 2015, 10.6 per cent of the country’s land area was covered by forestry, the second lowest rate in the EU.

“Although the area farmed organically increased by 165 per cent between 1997 to 1999 and 2016, Ireland had the second lowest percentage of agricultural land designated as organic in the EU in 2015,” the CSO report noted.

While emissions from cars improved greatly since 2005, more people are now driving to work. The CSO found the proportion of females aged 15 years and over who drove to work increased from 27 per cent in 1986 to 65 per cent in 2016. Male driving increased from 42 per cent to 53 per cent.

Bathing water quality also scored low. The 2016 report found Ireland to have had the joint sixth worst level in Europe. It said almost 93 per cent of tested sites were classified as being of sufficient quality compared to the EU average of 96.3 per cent.

Although air quality has improved since 1990 (for all indicators except ammonia), Ireland performed poorly when compared to other EU member states in 2015 for a number of pollutants.

As regards biodiversity, the index of common bird species increased from 100 in 1998 to 121.5 by 2016 but the amount of land given over to their habitats was lacking. The CSO ranked Ireland’s special protected areas under the EU Birds Directive as the second smallest in Europe.

The country had the eight smallest area designated as special areas of conservation under the EU Habitats Directive.

There were more positive developments in how we deal with waste. The amount of municipal waste generated fell from an annual average of 718 kilograms per capita by 2004 to 564 in 2014.

By 2015, Ireland was recycling 190 kilograms of packaging waste per capita, the third highest rate after Germany and Luxembourg.